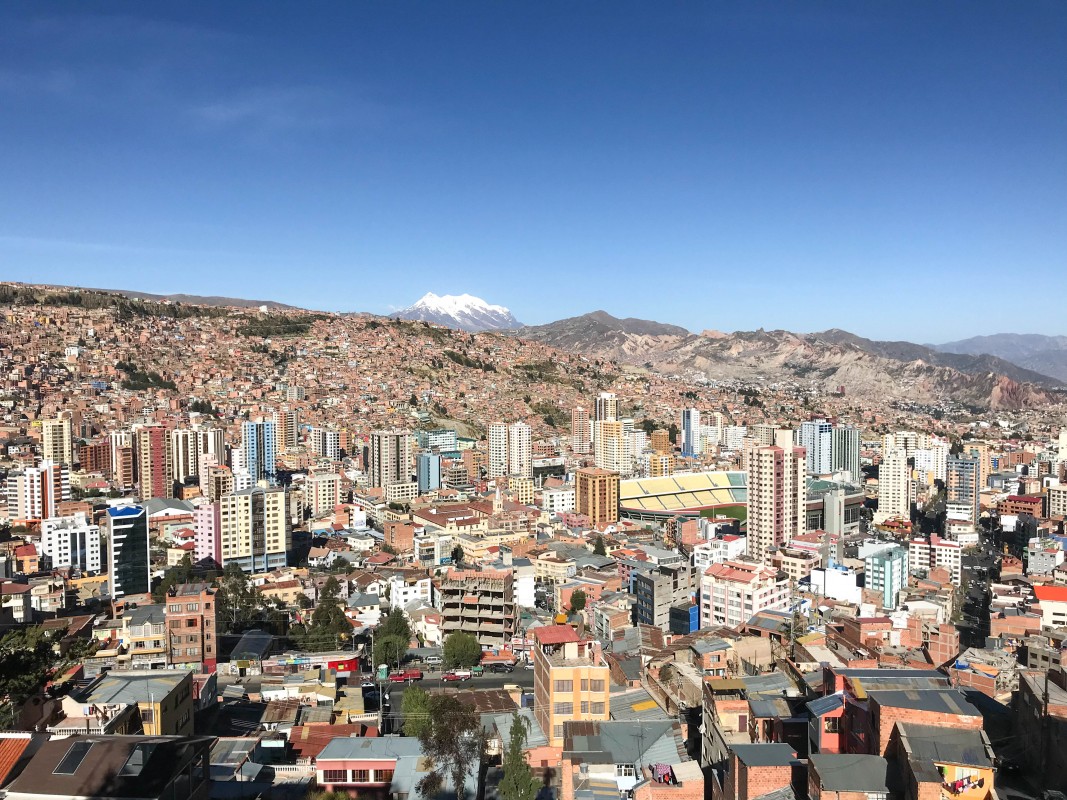 La Paz is a city of extremes. From the dizzying altitude (at 13,000 feet above sea level, La Paz is the highest city in the world) to the screeching traffic and pop-up street protests, I’ve never experienced anywhere quite like Bolivia’s de facto capital. This is a place where traffic guards dress up as dancing zebras to control the roads because zebra-crossings just don’t cut it… (go on, Google it, you know you want to).

It’s crazy and exhilarating and, honestly, a little overwhelming. But whatever you make of La Paz, this is one city that is sure to leave a lasting impression.

We had just 24 hours to explore La Paz, on our way to the Uyuni salt flats, which was just enough time to see the main sights and get a feel for what this city is all about.

You may also be interested in: Visiting the Uyuni salt flats in Bolivia 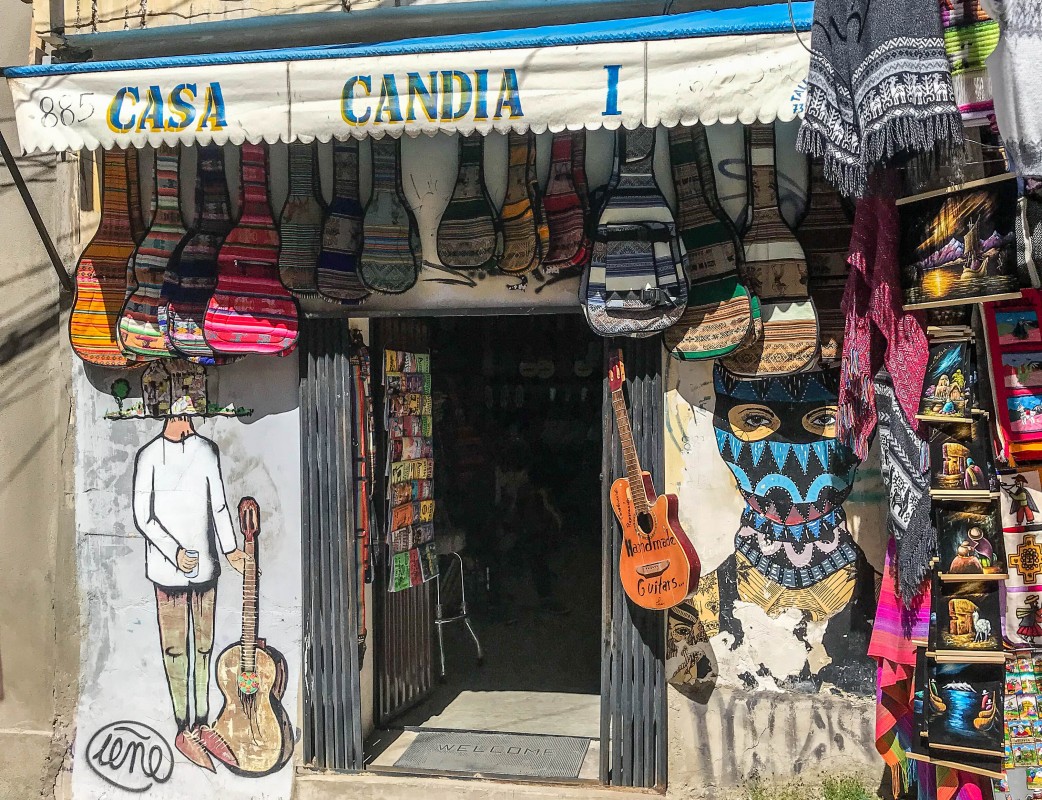 Where to stay in La Paz

For great value, location, and traditional charm, look no further than Hotel Rosario La Paz, when deciding where to stay in La Paz. This colonial-style guest-house is located in the heart of downtown, within walking distance to most of the city’s main attractions. The hotel has a lovely patio courtyard and some cute traditional touches in the rooms, like the knitted cholita toiletry holders! Double rooms start from around £50 per night, including breakfast. 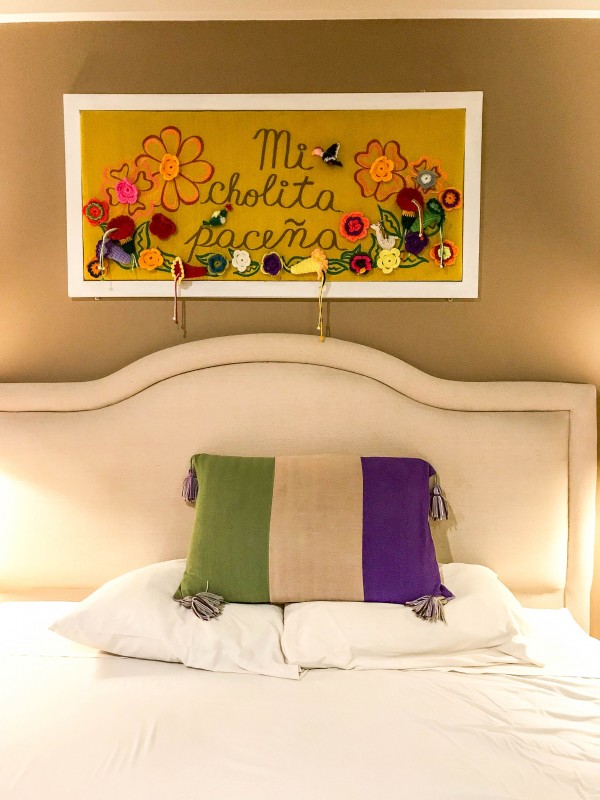 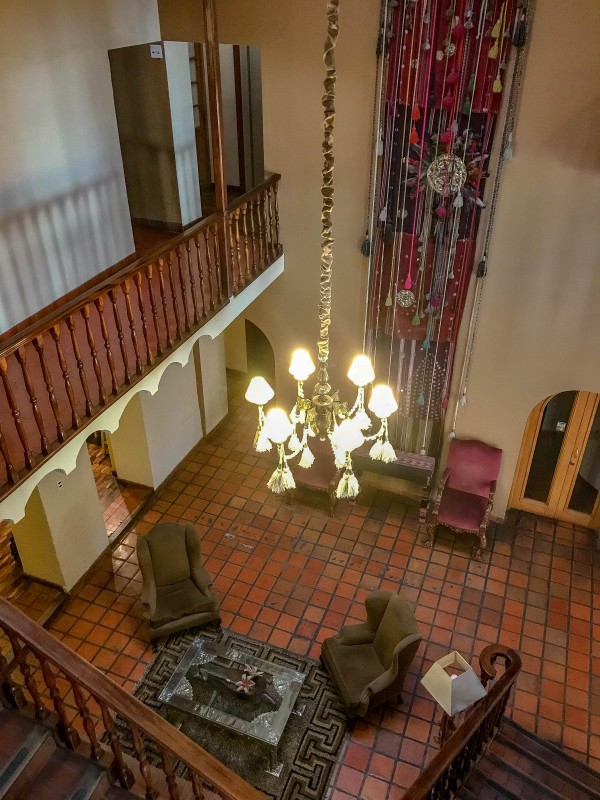 Where to eat and drink in La Paz

Another benefit of staying at Hotel Rosario La Paz is that you’re well located to some great foodie finds. It’s surprisingly hard to find a decent cup of coffee in South America, as most of the good stuff is imported straight out of the continent, but Antigua Miami is one exception to the rule. As well as serving up a great locally-sourced brew, the cafe’s shabby-chic interiors are every Instagrammer’s dream. Stay for brunch, lunch, or enjoy a craft beer on the sunny outdoor terrace.

As evening falls, head to Restaurant 1700, just around the corner from the Witches’ Market. You’ll find this quirky eatery hidden away at the top of a 300-year old building, packed full of bizarre antiques and wood carvings. The food is top-notch (especially the veggie options, in an otherwise meat-obsessed city), as is the free Bolivian gin sample on arrival!

What to see and do in La Paz

I’m not normally a fan of organised tours, preferring to explore a city at my own pace, but I honestly can’t recommend Red Cap City walking tours enough – especially if you’re short on time in La Paz. Our local tour guide provided a fascinating insight into the history, politics and culture of Bolivia, which we would have never experienced if we’d headed out into the city alone. It was also a relief to know we were being guided around safely in a city where, unfortunately, crime is still fairly common.

Red Cap run a wide range of daily tours, including private and group city tours, as well as more bespoke architecture and foodie tours, all led by local expert guides. We opted for the half-day group city-centre tour, which covered most of the main tourist sights, as well as a few hidden gems along the way. 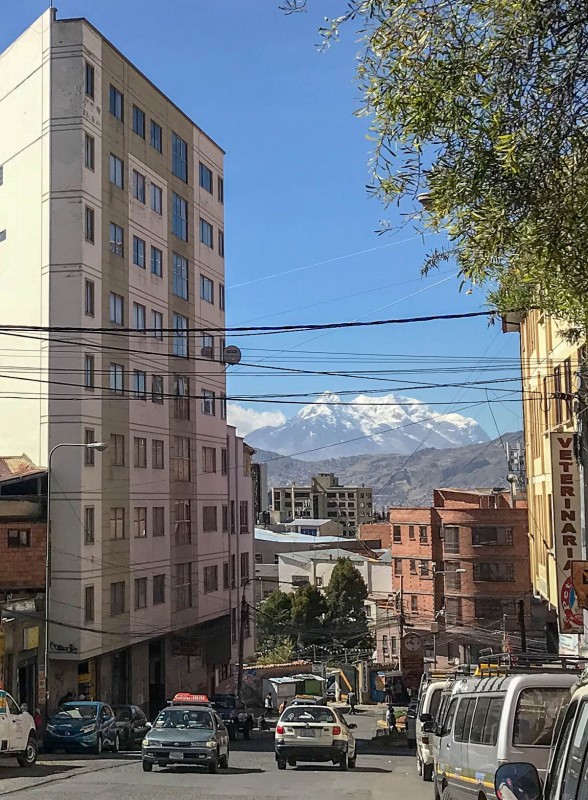 Plaza San Pedro is the starting point for Red Cap City walking tours and this is where you’ll find one of the most notorious, high-security jails in the world.

Before arriving in Bolivia, almost everything I knew about La Paz I’d learned from ‘Marching Powder’: the best-selling memoir of Thomas McFadden, a British drug-smuggler, who spent years banged up in San Pedro Prison. As described in his book, what makes this prison so unique is that it’s run by the inmates themselves. Prisoners have to work and pay for their own cells and whole families live together within the prison walls, creating a kind of quasi-society within a society. Sure enough, when we arrived at the plaza, we spotted rows of children exiting the prison gates on their way to school, which brought home just how bizarre this place really is.

Once upon a time, you could take a tour inside the prison (crazy, right?!) but nowadays any tours you do see advertised are illegal and deemed to be incredibly unsafe. 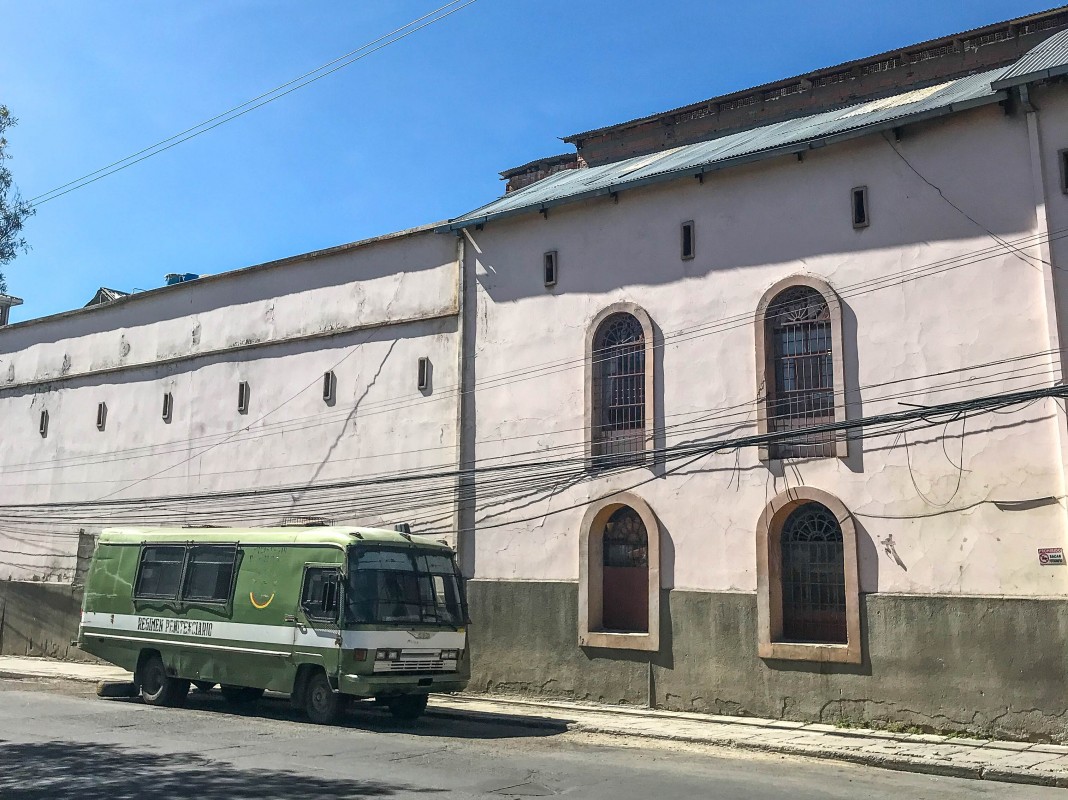 Next up, you’ll be whisked to the bustling street markets of La Paz, where food stalls spill out into the roads and Bolivian cholitas keep careful watch over mountains of fresh produce. I was glad to be led by a guide, otherwise I’m pretty sure I would still be trying to navigate my way out of the maze of alleyways and side-streets! Prepare for sensory overload, as you encounter the aromas, noise, and chaos… all part of the Bolivian market experience! 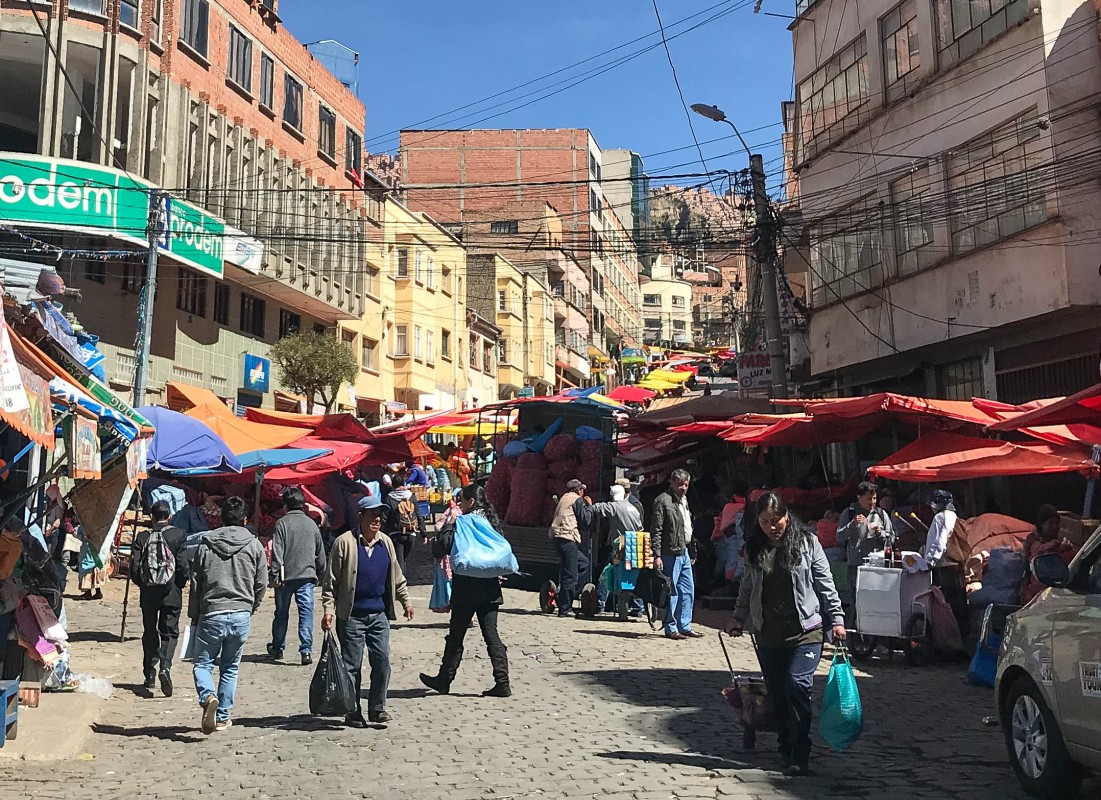 You can’t visit La Paz without making a trip to the famous Witches’ Market (or ‘Mercado de Las Brujas’). Brace yourself, as you never know what you’ll stumble across in this colourful market area, from handmade crafts and artisan stalls, to voodoo remedies and dried llama fetuses – a traditional, sacred gift to the goddess Pachamama. 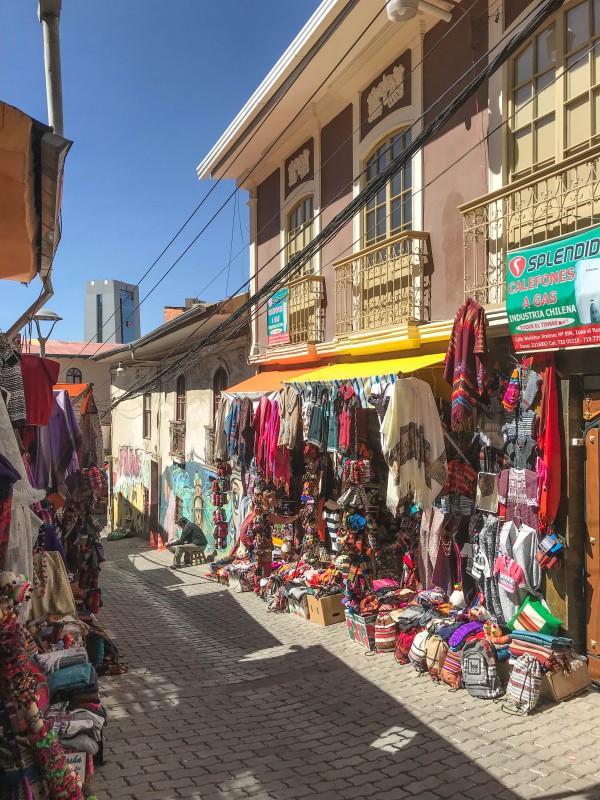 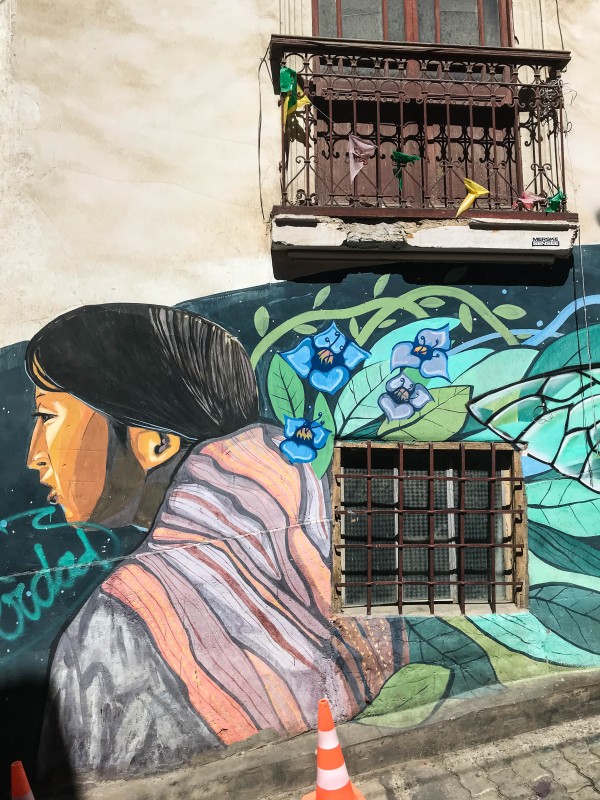 Next up, you’ll arrive at San Francisco Plaza. Amidst this concrete jungle is a beautiful 18th century church – the Basilica of San Francisco – one of La Paz’s most iconic landmarks. It’s free to look inside, or you can take a tour to discover more about the church’s history and unique architecture. If you buy a ticket for the San Francisco Cloister, you’ll also have access to the church rooftop, where you’ll be greeted with some of the best views in La Paz.

Just around the corner from the church is the covered market, Mercado Lanza – a must-visit for any foodies. We had some free time here to explore the local food stalls, which are staggered over four floors of a converted parking lot. Be sure to grab some freshly squeezed juice for less than a dollar, from one of the colourful juice bars while you’re here. 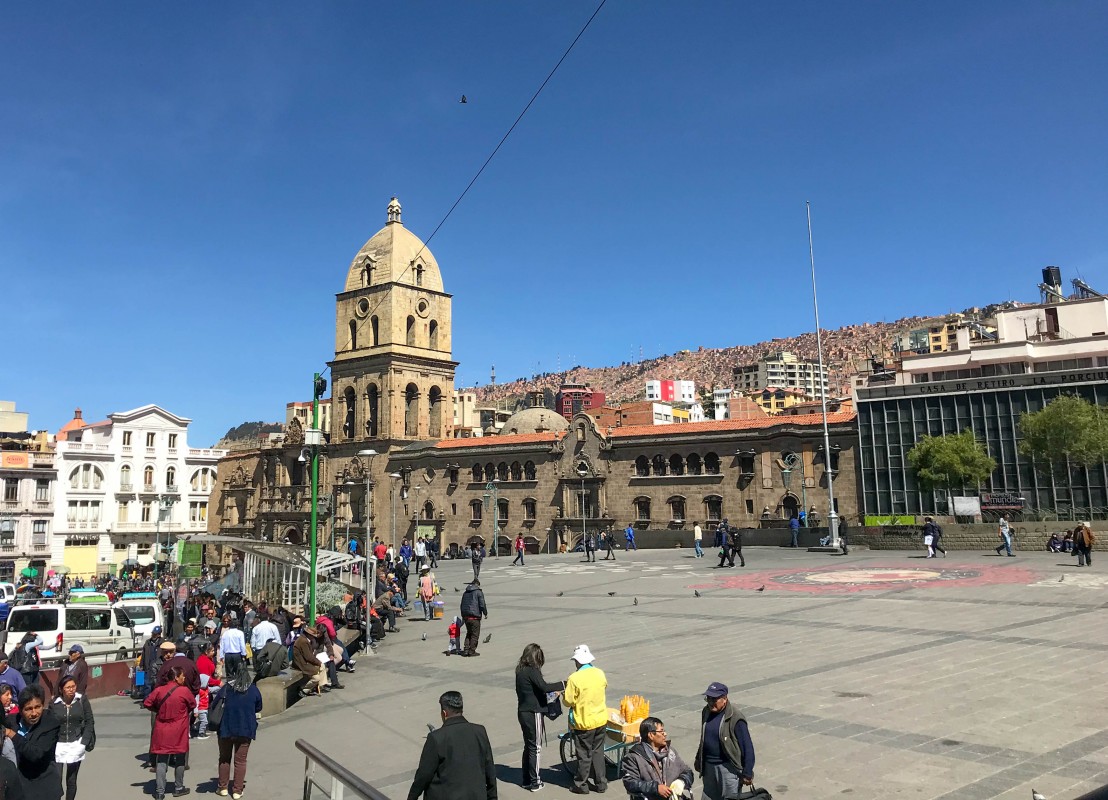 From one historic plaza to the next (this is South America after all), the central Plaza Murillo is the beating heart of political life in Bolivia. Here, you’ll find the presidential palace, congress buildings, and cathedral.

If you look closely, you’ll spot bullet holes in the buildings surrounding the plaza – evidence of the country’s turbulent and not-so-distant past. Our guides took us to a local restaurant nearby (Sol y Luna) to tell us more about the country’s complex history and political struggles, which gave so much context to these sights and was a fitting end to our walking tour. 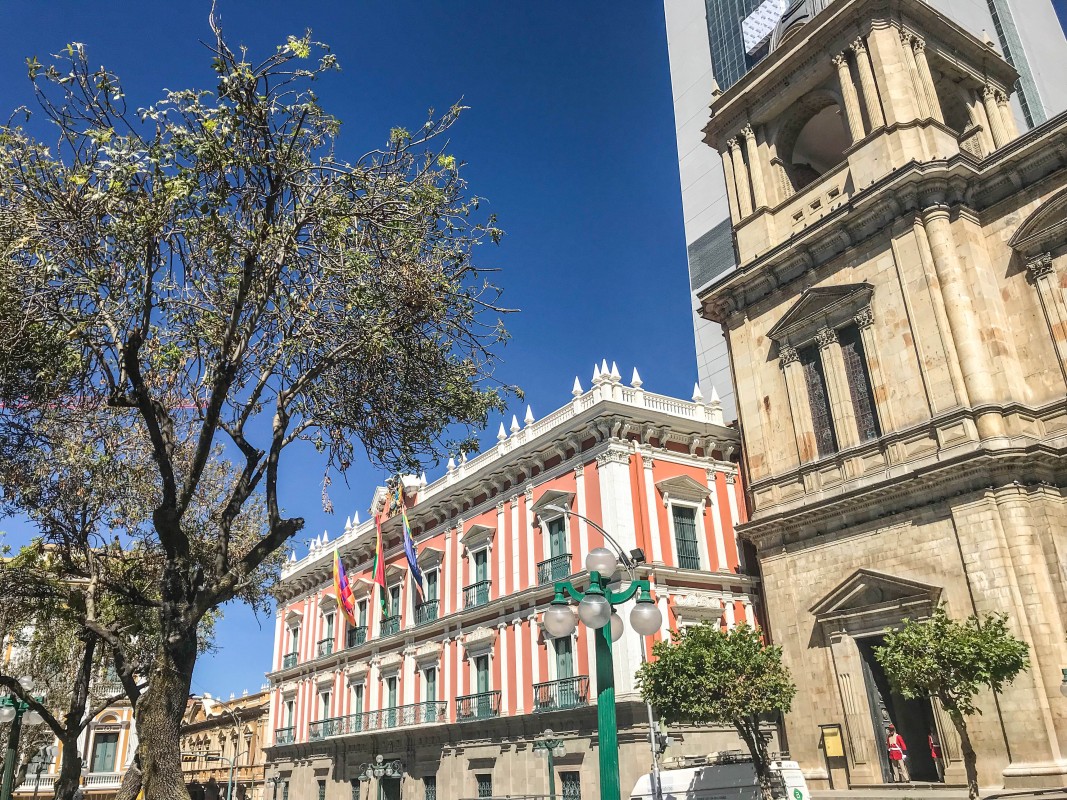 Once you’ve completed your walking tour of the city-centre and had time to catch your breath (literally), make your way to Mirador Killi Killi (it’s not as ominous as it sounds, I promise). It’s a steep, up-hill climb to this panoramic viewpoint – a bit of a killer when combined with the extreme altitude – or you can grab a cab to the top.

I didn’t really know what to expect of La Paz but seeing it from this perspective, I was taken aback by the bizarre mish-mash of old and new. Crumbling colonial buildings stand in stark contrast to modern skyscrapers, all surrounded by snow-capped mountains that seem so out of place, they look like some kind of artificial backdrop. From here, you can see it all (minus the noise and chaos) and it is simply breathtaking. Even better, tie your visit in with sunset, for the perfect ending to your day in La Paz. 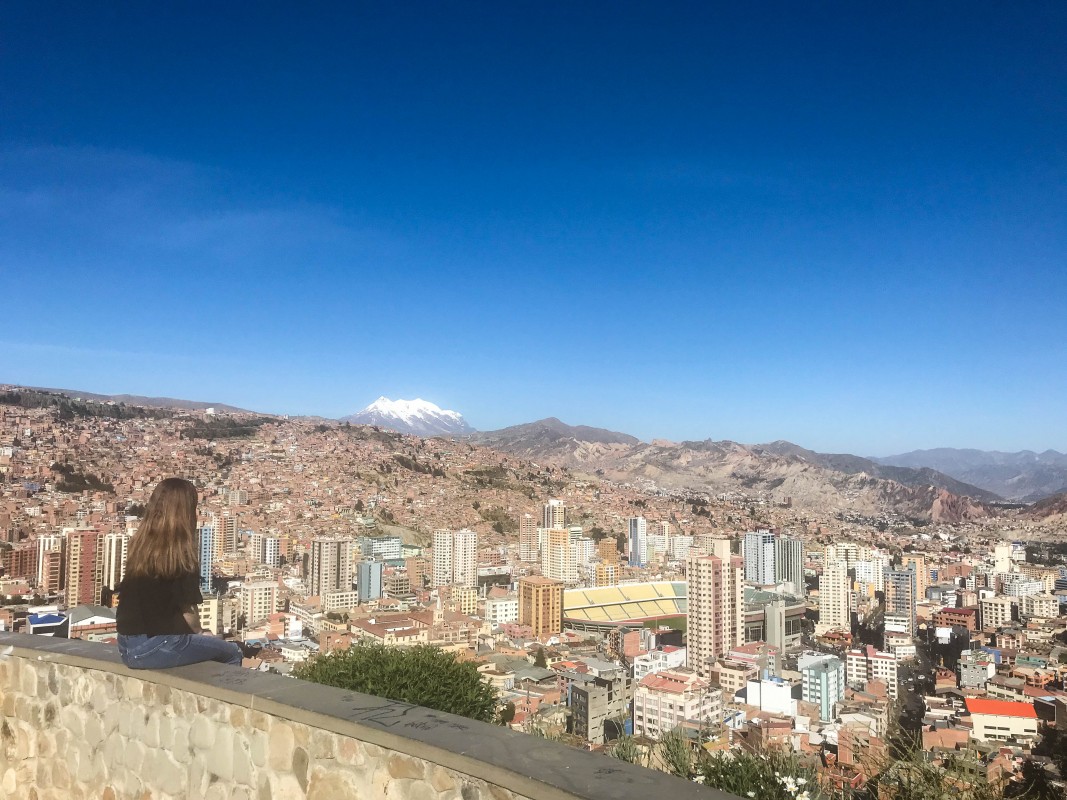 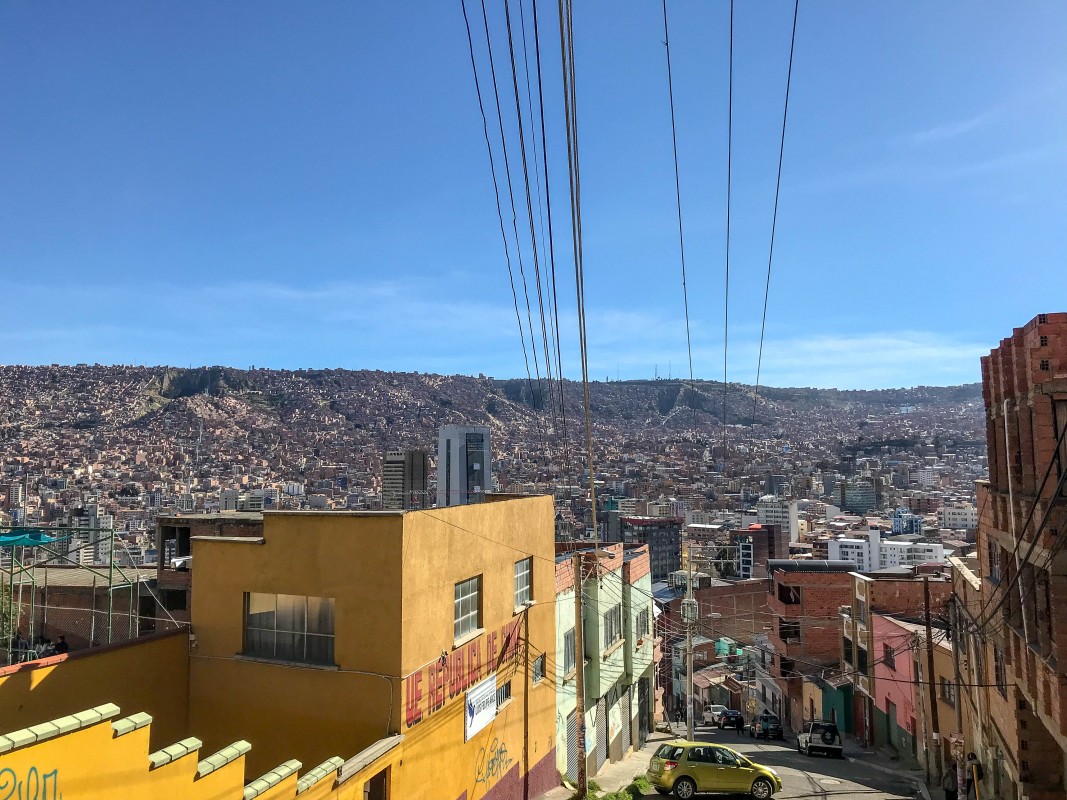 La Paz is surreal and fascinating and like nowhere else I’ve ever been. I’m so glad I got the chance to visit this unique city but I was equally glad to escape the hectic streets for the peace and quiet of the Uyuni Salt Flats! Have you been to La Paz? What did you think?

If you’re travelling elsewhere in South America, check out my guides to Bolivia, Peru, Chile, Brazil and Argentina.