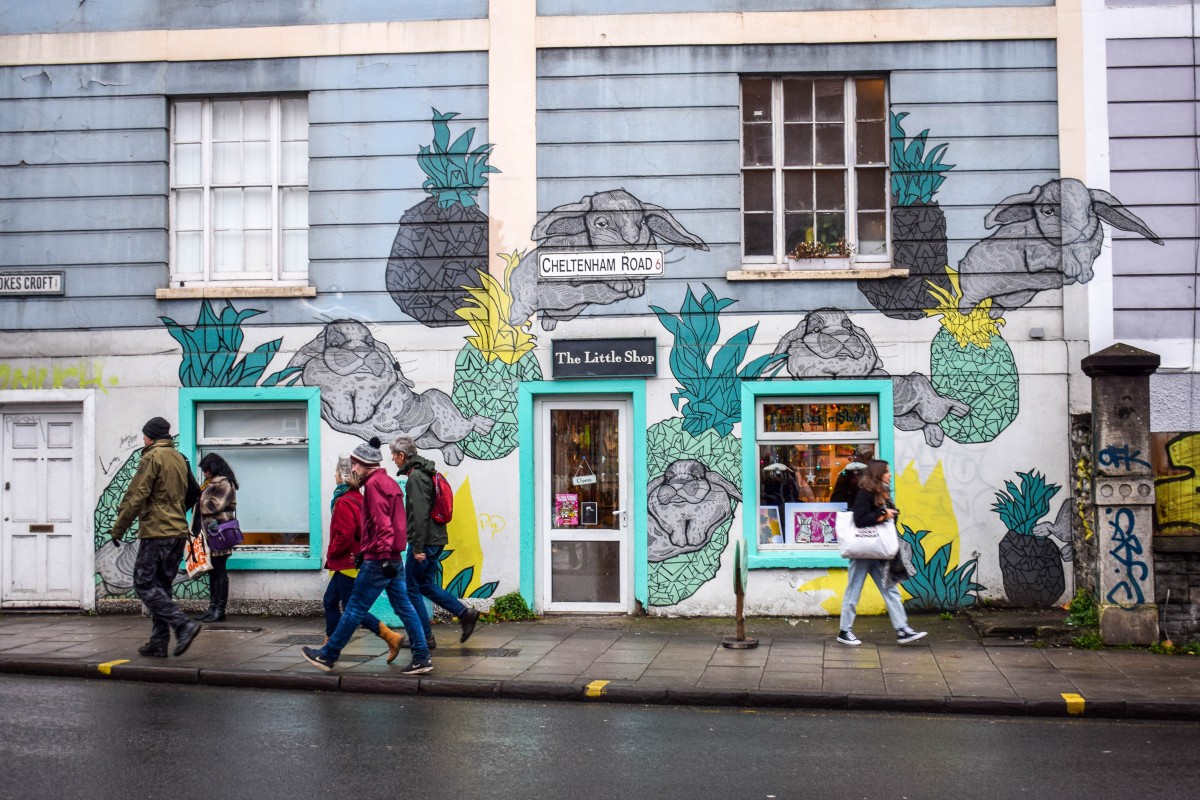 Sometimes, there’s nothing better than being a tourist in your own town. It’s so easy to walk by the same places day after day, without ever really knowing the history, the stories, or the people behind them.

Which is why I jumped at the chance to join an exclusive tour of one of Bristol’s most eclectic neighbourhoods – Stokes Croft & Montpelier – to celebrate the launch of Bristol photojournalist Colin Moody’s brand new book, published by The History Press. 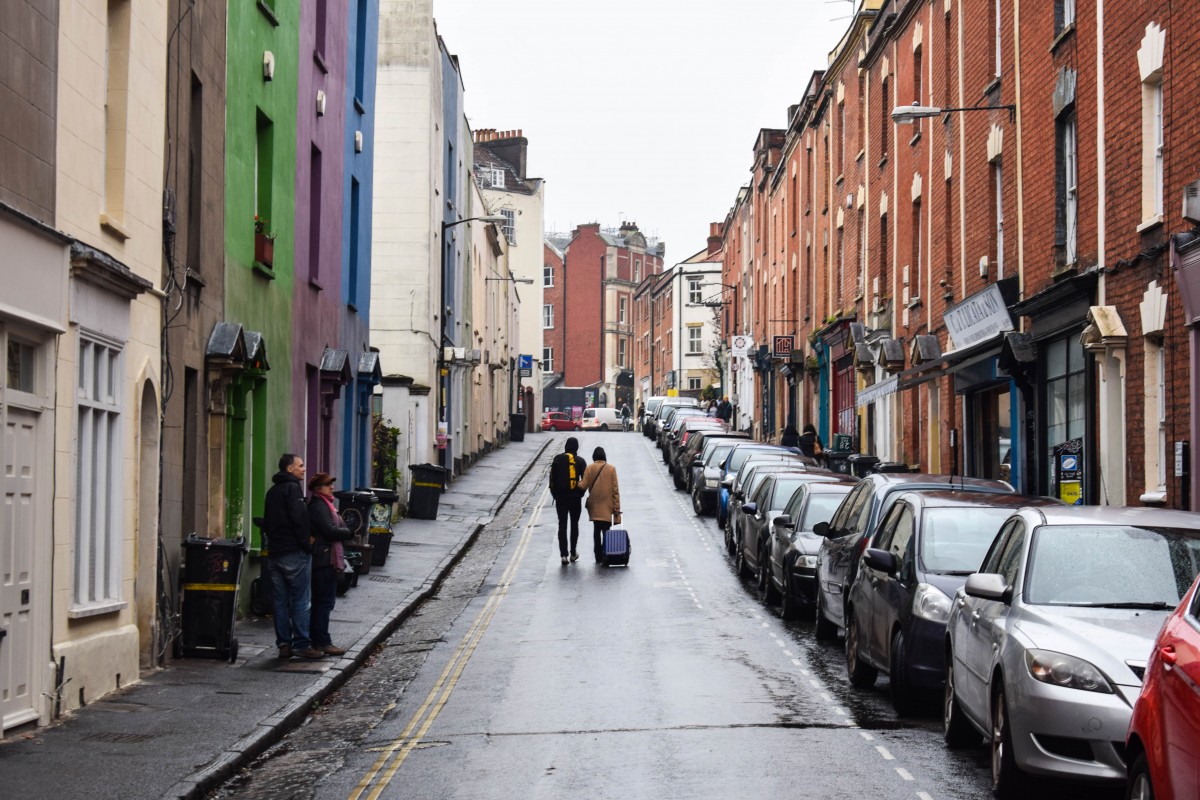 * I received a copy of this photo book to review but I was not financially compensated in any way. The opinions expressed are my own and are based on my observations whilst reading the book and taking part in the tour.

Bristol is renowned worldwide for its vibrant street art, thriving independent culture, and liberal ethos, and nowhere embodies these values quite so boldly as Stokes Croft and its charming neighbour, Montpelier.

This year, both Stokes Croft and Montpelier featured in Travel Supermarket’s top 10 “hippest” neighbourhoods in the UK  and it’s easy to see why, as you wander through the graffiti-filled streets, packed full of independent stores, locally sourced cafés and quirky galleries.

Bristol’s “cultural quarter” is characterised by an overwhelming sense of community pride, self-expression and individualism. This is somewhere people can be whoever they want to be, without so much as a second look.

It is the beating heart of Bristol, pumping colour and creativity into the veins of the city. 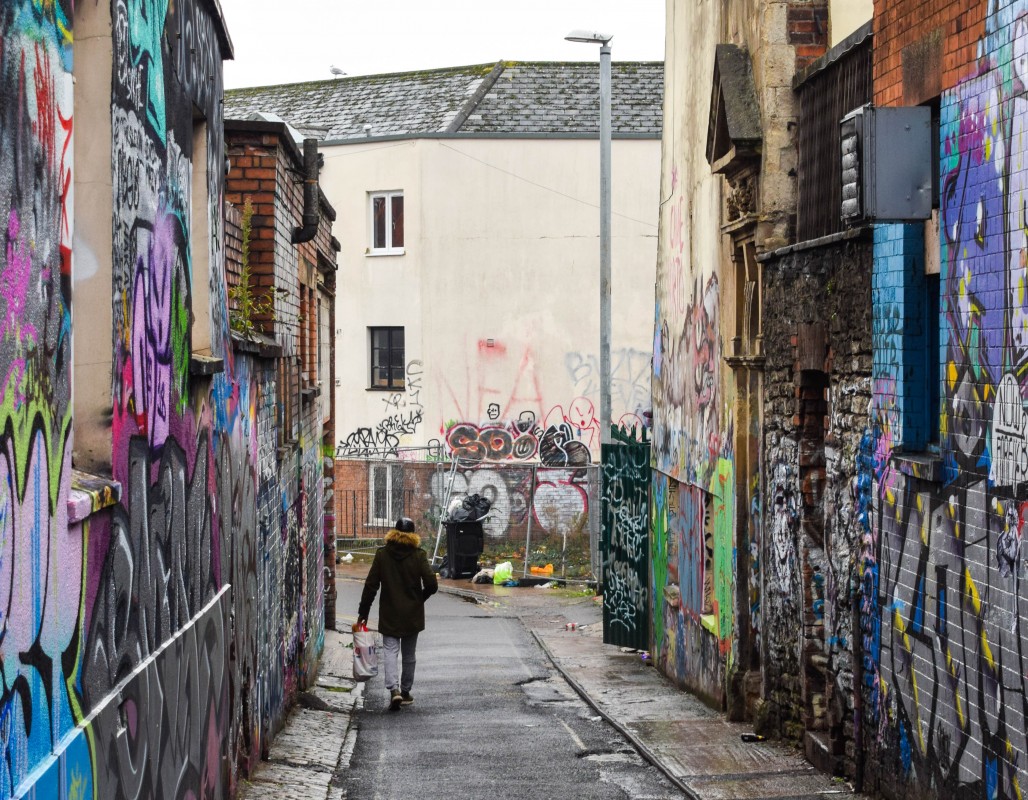 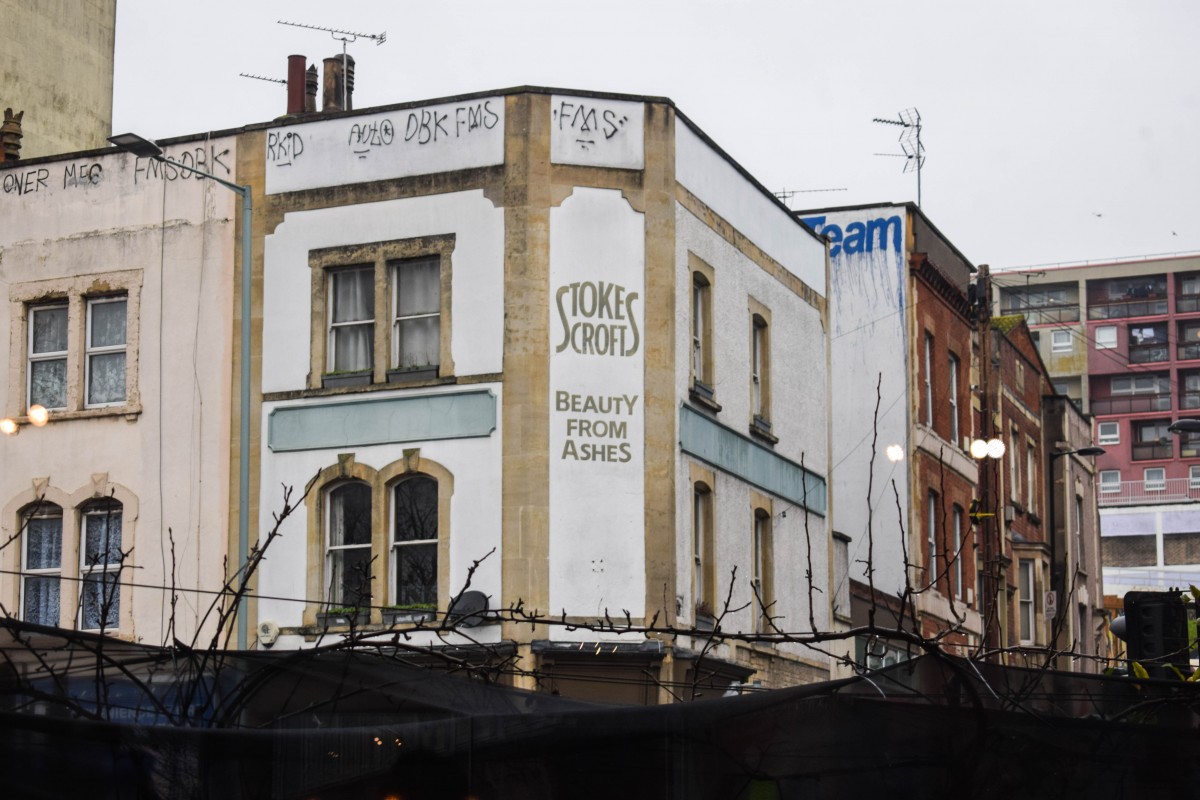 But as gentrification creeps in, locals and Bristol residents alike are fighting for Stokes Croft to retain its distinctive, gritty vibe. As I write, the main hub of community life – Hamilton House – is just weeks away from potential closure, with developers finalising plans to build luxury flats in its place.

It’s an age-old story of community vs. private ownership; one that has been impossible to ignore in Bristol, with bright orange ‘Save Hamilton House’ posters illuminating the city walls for months now. 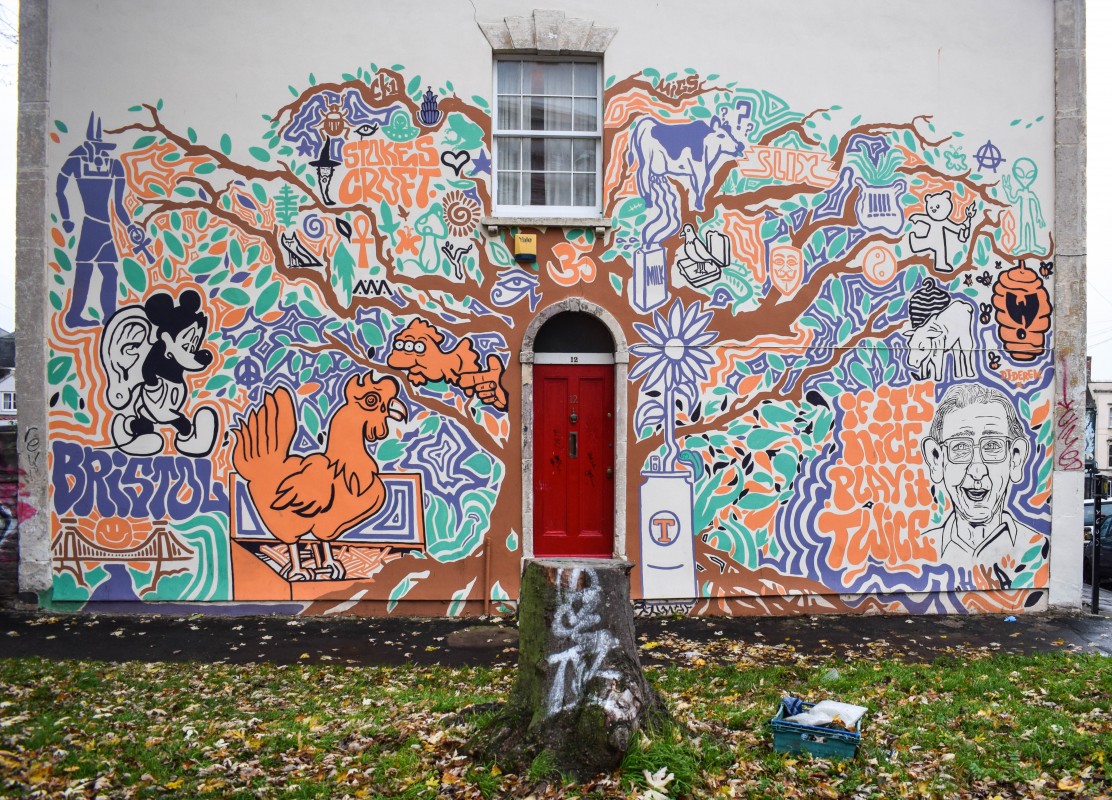 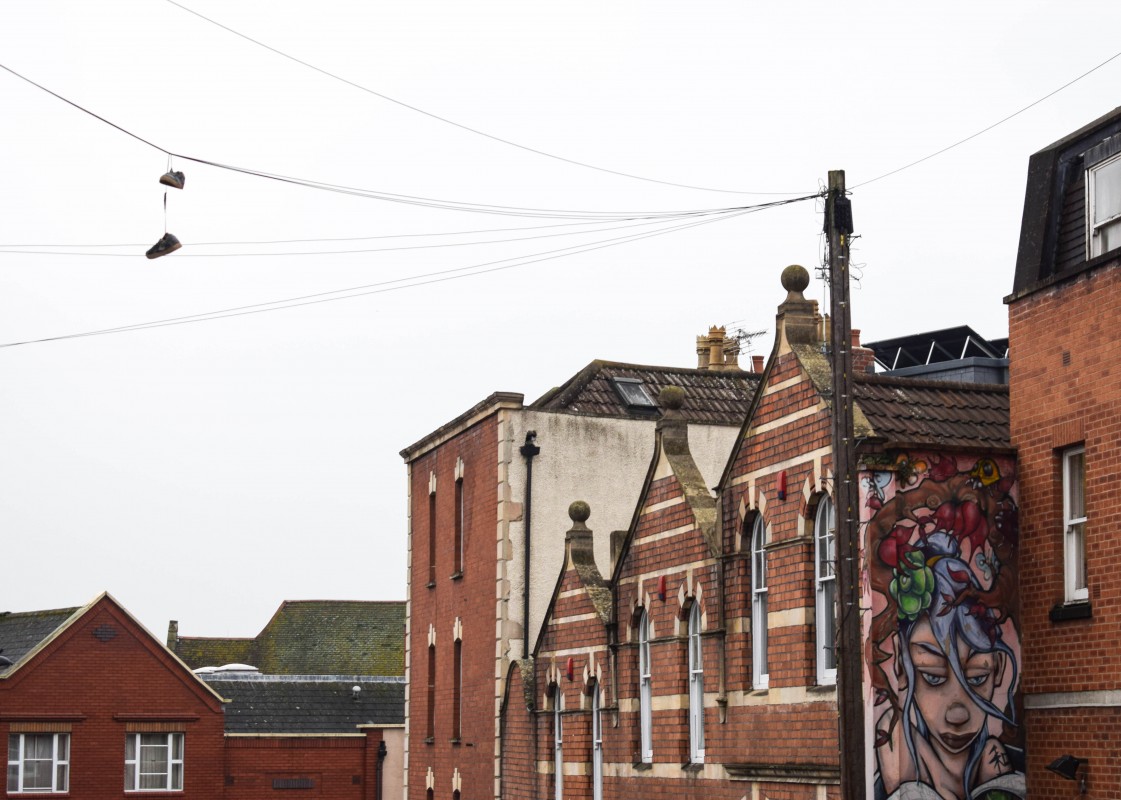 So it’s timely that Colin Moody’s brand new photo book goes beneath the surface to bring to life the colourful characters and stories that make this part of Bristol so unique.

The People’s Republic of Stokes Croft

Our tour starts rather fittingly at the People’s Republic of Stokes Croft, on Hillgrove Street. The PRSC is the activist voice of the community; campaigning for the protection of street art and public spaces and inspiring locals to speak up about issues that are important to them.

On the side of the PRSC building is a communal water fountain and charging point for the homeless, with a statement in bold: “Water for All”. This really sums up the whole vibe of Stokes Croft and PRSC’s vision of a shared community.

Next door to the PRSC building is Stokes Croft China Shop where you can purchase beautiful Bristol-themed mugs and souvenirs, handcrafted on-site, knowing that all your money is being pumped right back into the activities of the PRSC. 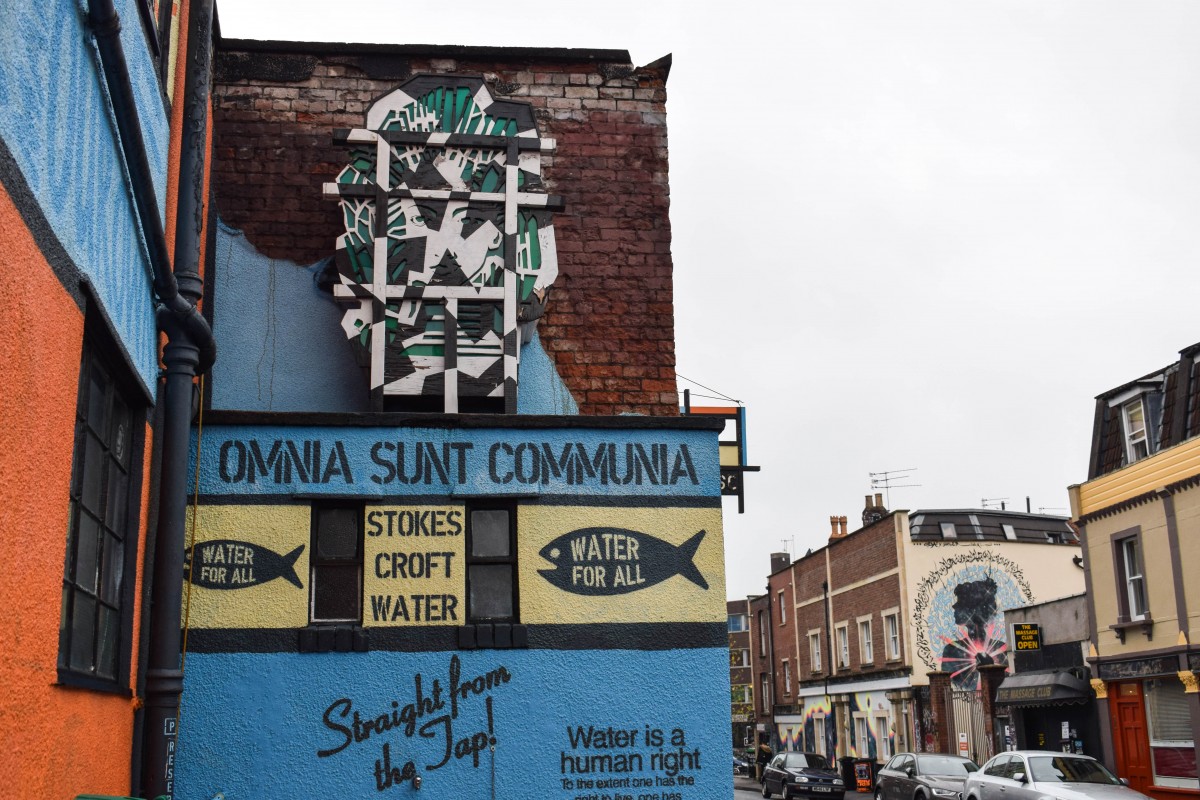 The whole area around Hillgrove Street is packed full of colourful murals – from local artist Cheba’s cosmic girl, to a three-storey-high pink tsunami by Phlegm and MM-13. You could easily spend an hour graffiti-spotting and photo-snapping around these streets… and new art pops up every day, so no one visit is ever the same as the next! 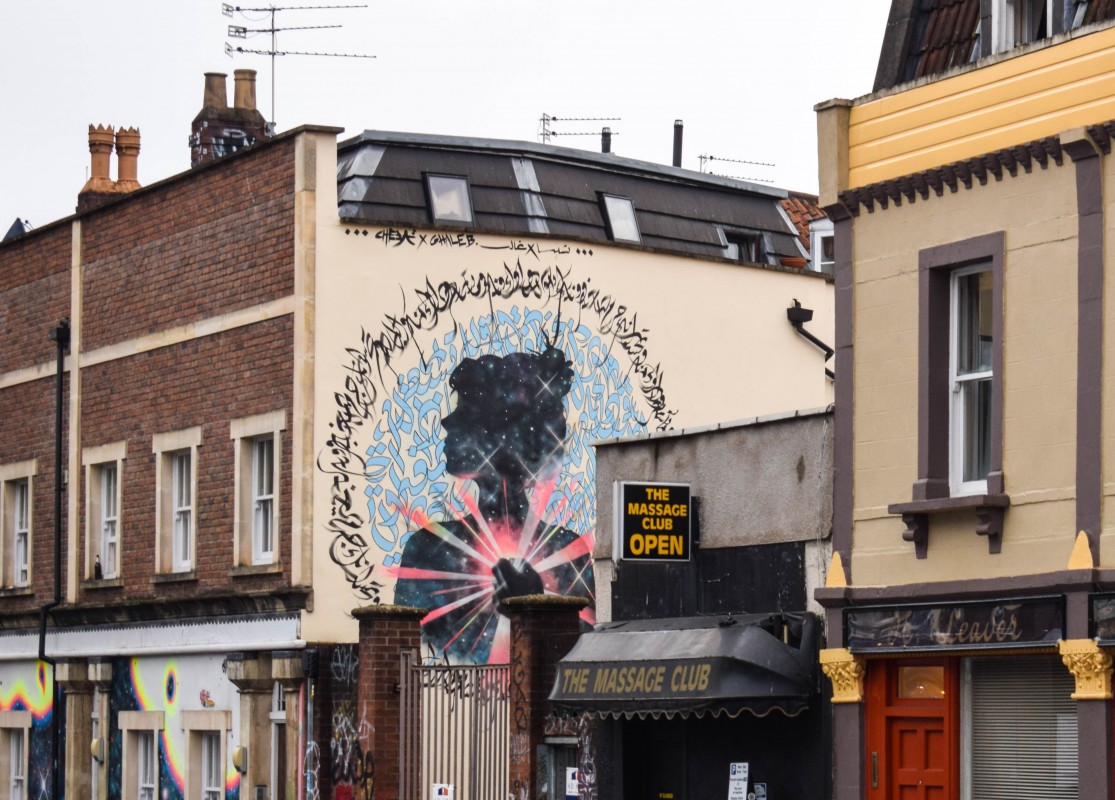 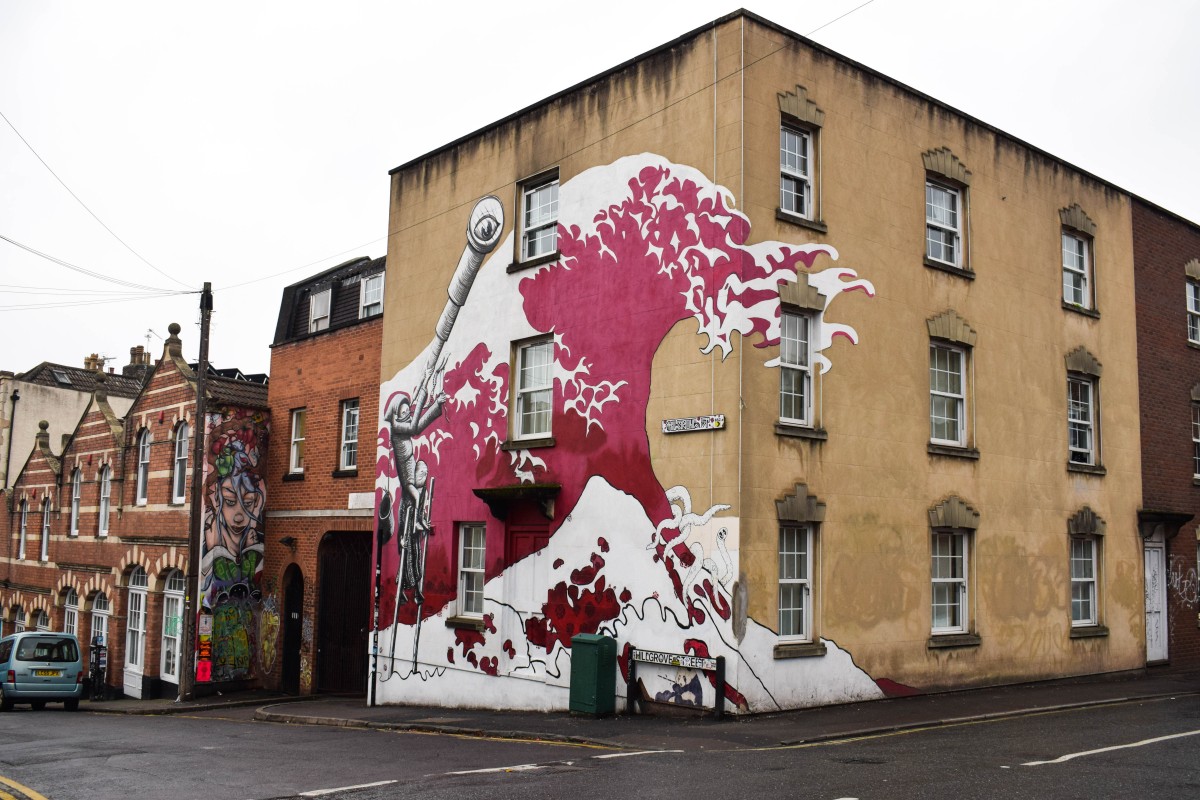 At the bottom of Jamaica Street is “Turbo Island” – an unofficial Bristol landmark and symbol of Stokes Croft. A shoe shop stood in this spot before the bombings of World War 2 and it has remained vacant ever since.

It may look like a patch of waste-ground to the average passer-by but Colin’s book describes this as the local “village green” – a congregating space for the community. It has been the site of ongoing campaigning against corporate advertising and remains a juxtaposition of giant bill-boards and artistic protests. 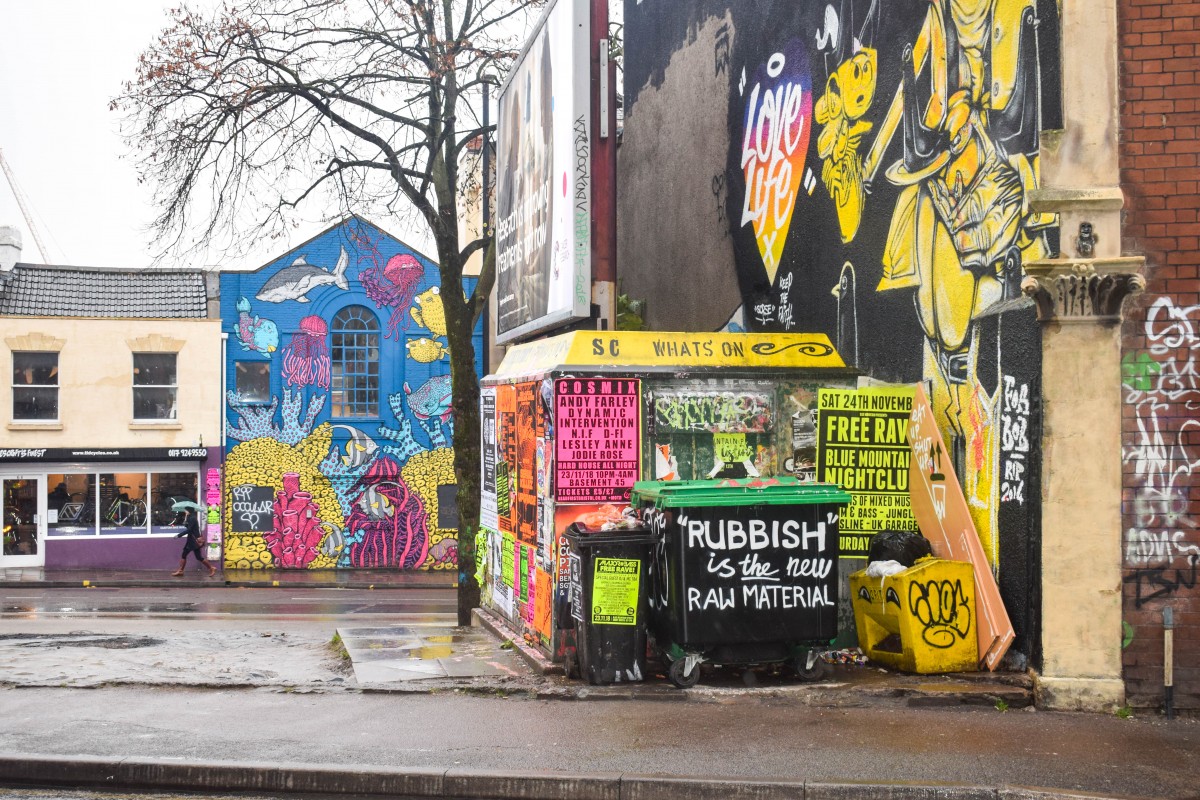 Turbo Island quickly leads on to the main drag known as “Stokes Croft”, lined with independent shops, galleries and cafes – each one with a brightly designed shop-front to rival the next. 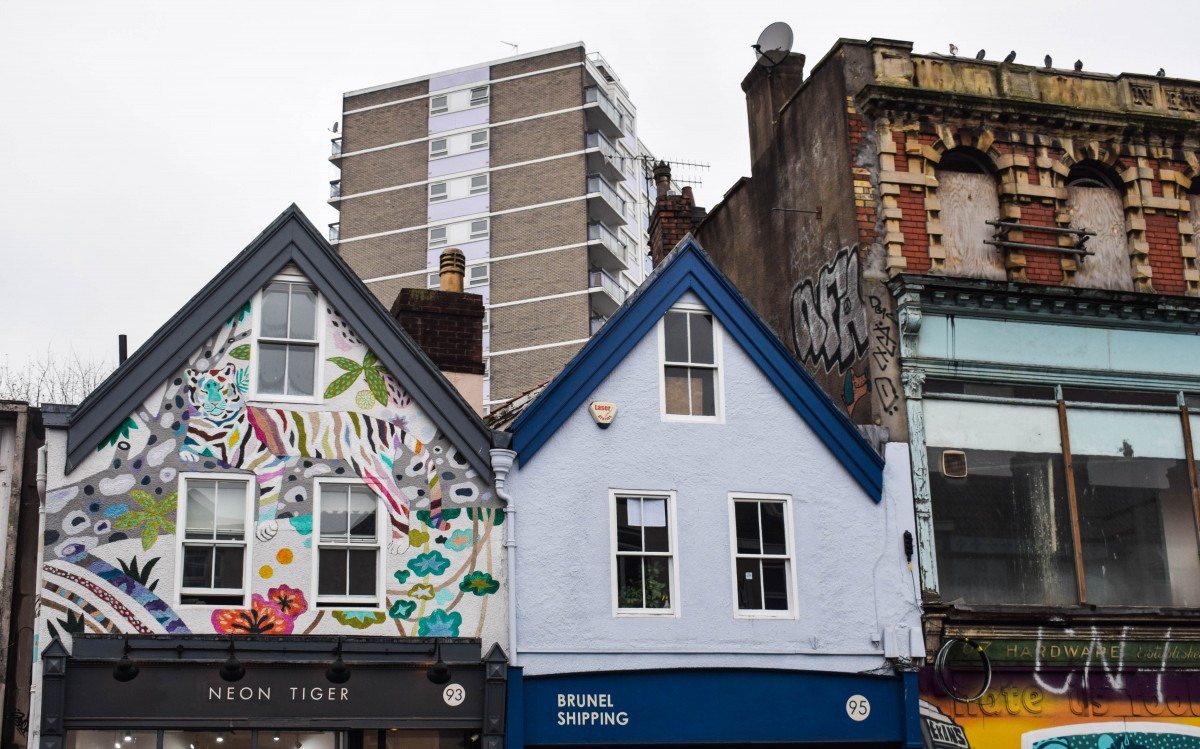 Historically, the land known as Stokes Croft fell beyond the city walls and was a playground for all kinds of social deviance – from circuses to bare-knuckle fighting.

To this day, this is one community that refuses to play by the rules. The street signs are covered in stickers – a striking symbol of dissent against local authority, whilst political street art and slogans plaster the walls. 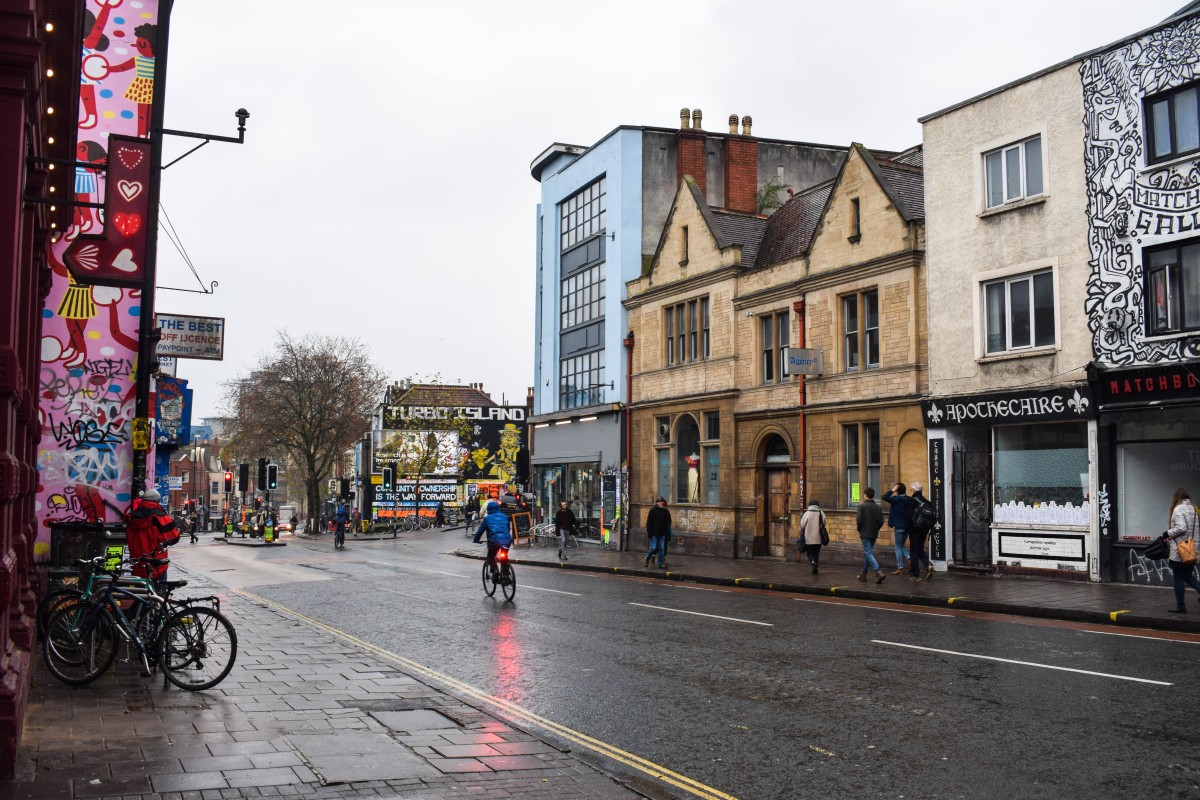 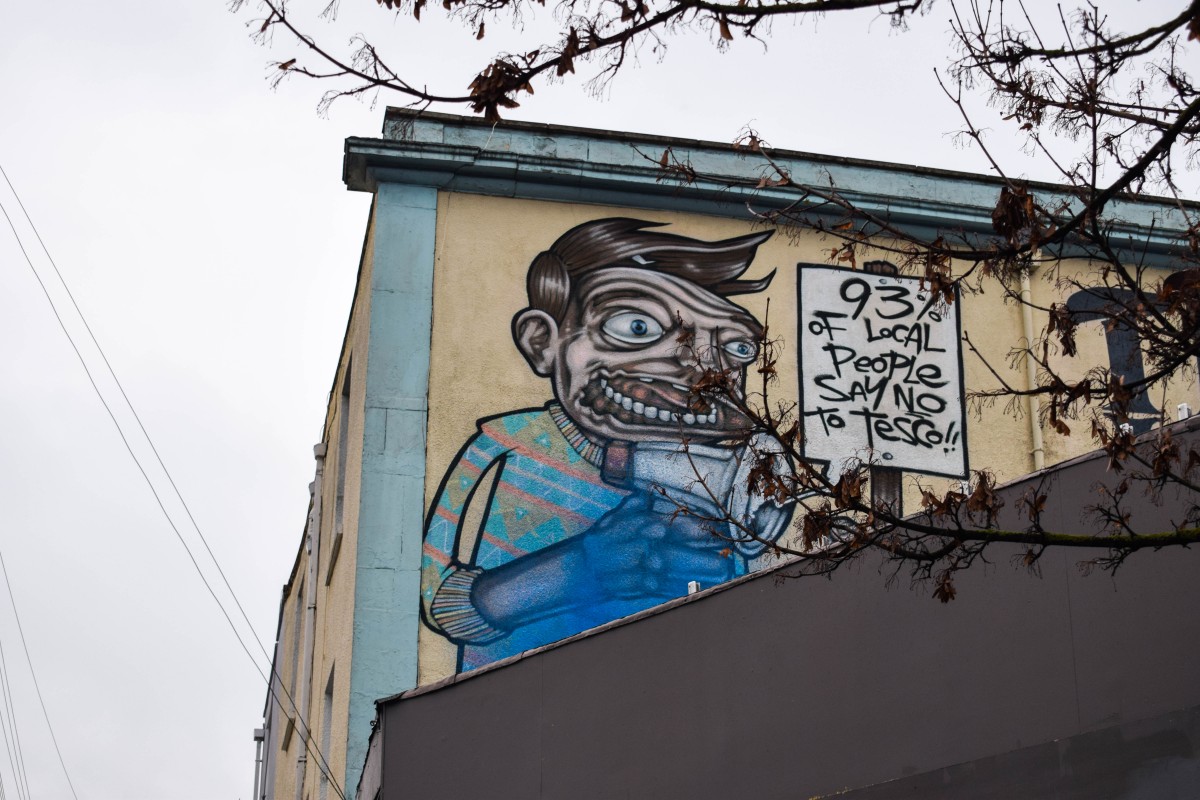 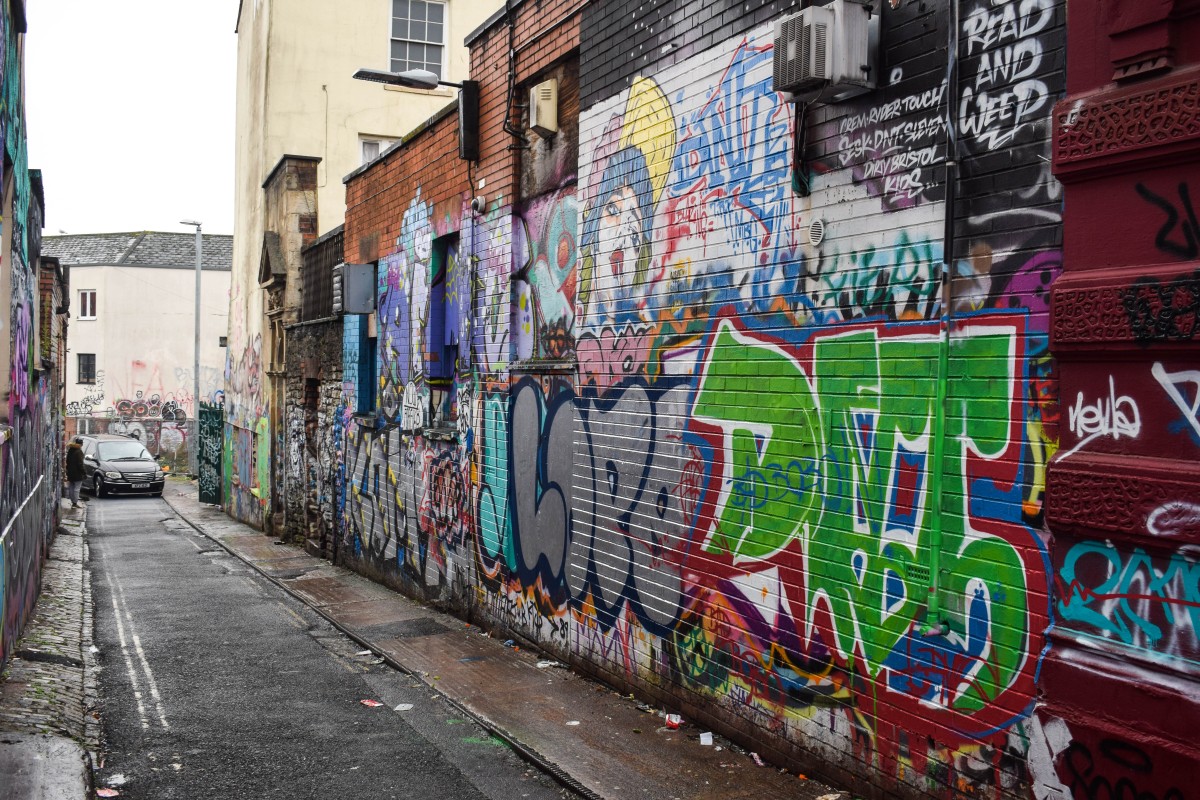 At the very heart of Stokes Croft, sandwiched between two sky-high murals (Cosmo Sarson’s giant breakdancing Jesus, and the one that everyone flocks to see – Banksy’s famous ‘Mild Mild West’) is Hamilton House.

It looks like any other office block from the street, but step inside and you’ll find the busiest notice board in all of Bristol. From Brazilian dance classes and techno yoga to pop-up community kitchens, this is a buzzing hive of community activity and life. 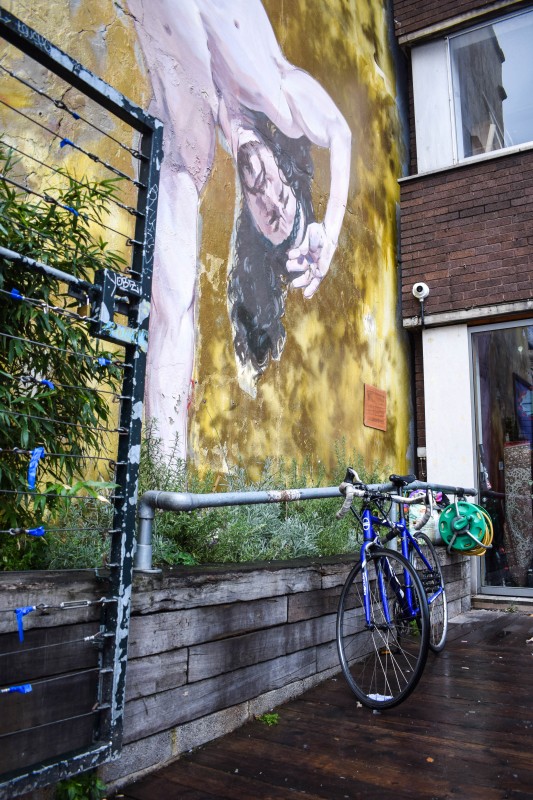 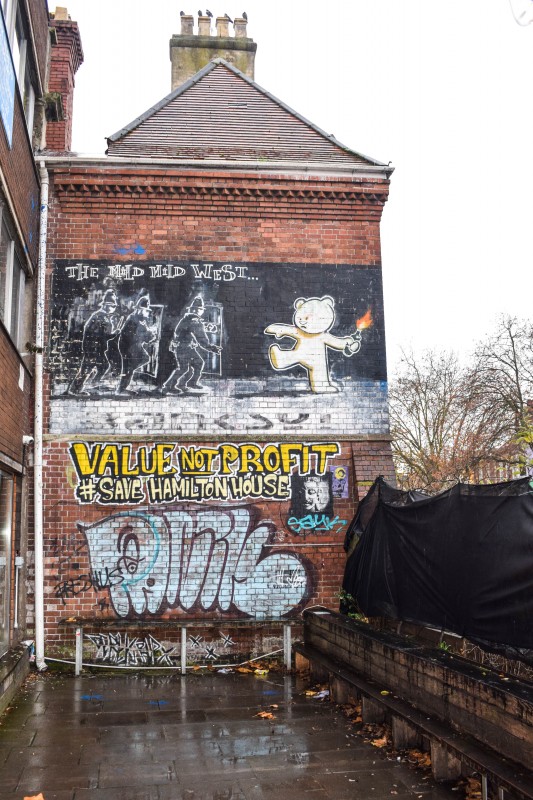 Historically, Hamilton House has also been the stomping ground for many of the city’s local artists, who were able to rent cheap studio space from the community owners, Coexist. But sadly, one by one, the artists have vacated as the fate of Hamilton House hangs in the balance. We manage to catch a glimpse of what’s left behind in the public gallery space – an eye-catching exhibition of painted doors, designed by some of the city’s most talented artists. 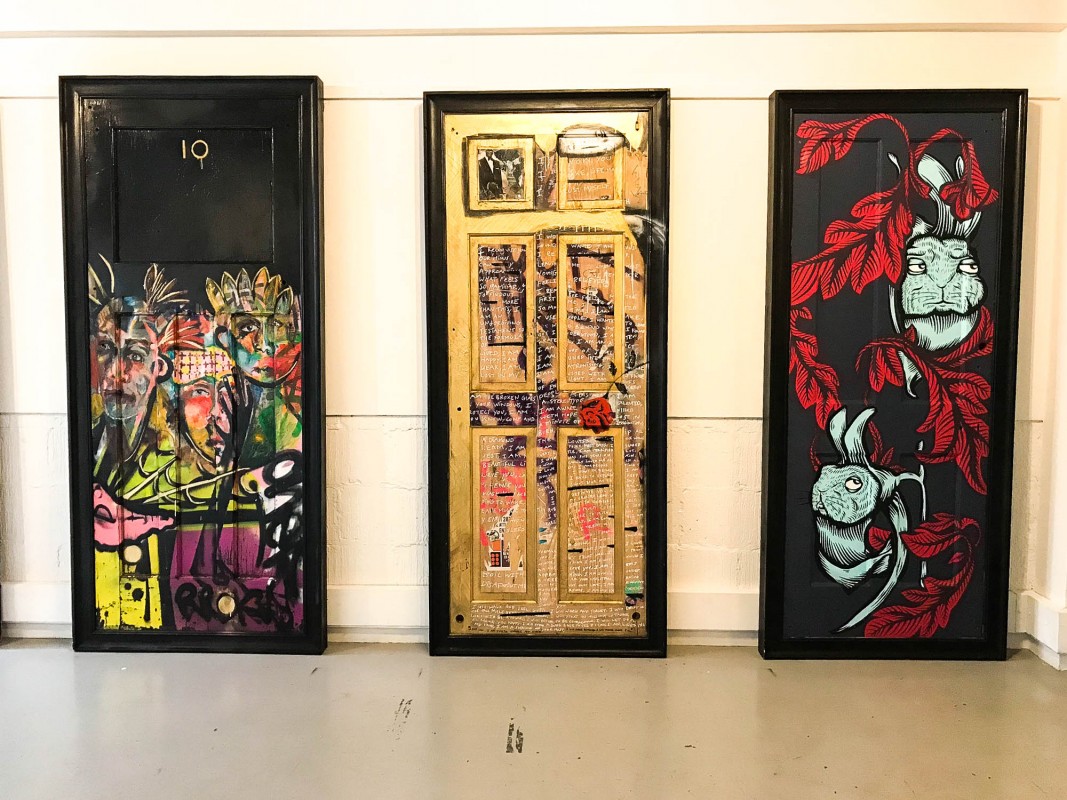 From here, Stokes Croft very quickly morphs into Montpelier. The whole neighbourhood has a charming, olde-world vibe and is home to one of Bristol’s best kept secrets – Picton Street. 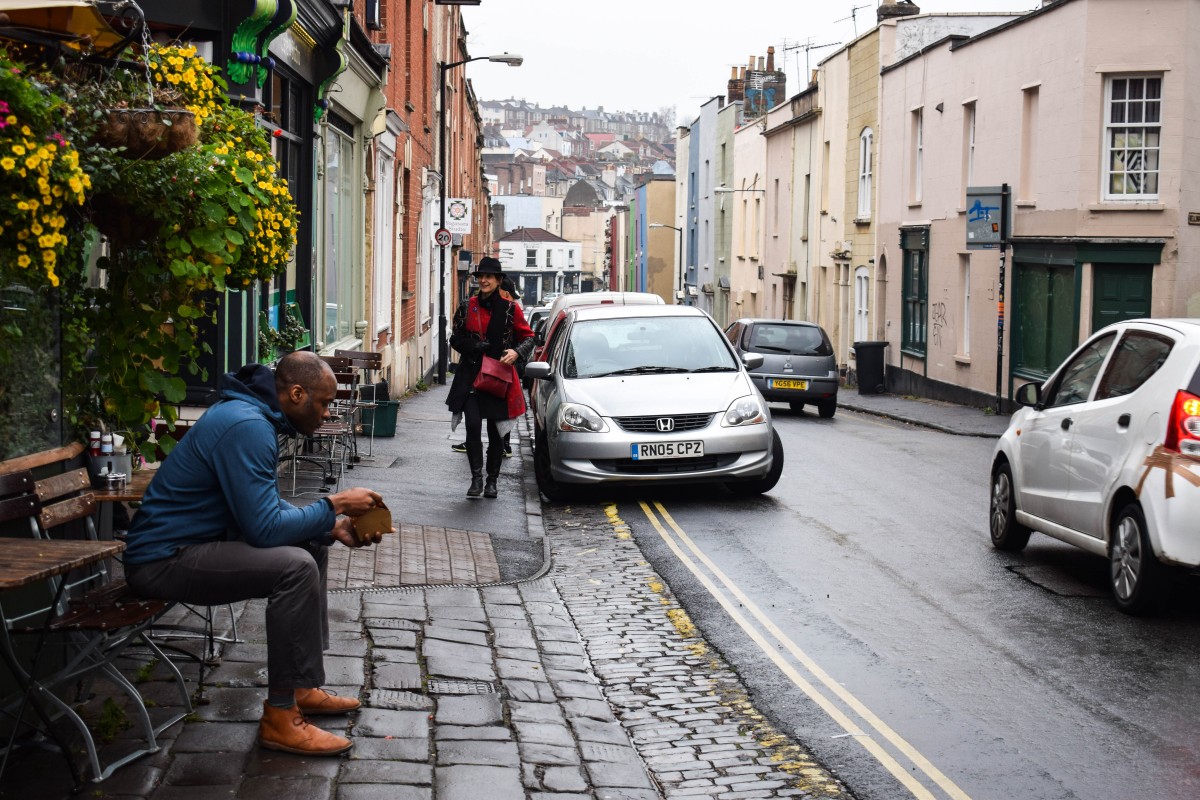 Locals in the know head here for the delights of The Bristolian, Bells’ Diner and Oowee Diner – “the best burger in Bristol”, apparently (says the vegetarian). But there is plenty more history to discover down these streets, such as the old “Charley Box”, where the drunken and disorderly used to be detained whilst awaiting trial.

A quick arancini stop at a traditional Italian deli (C. & T. Licata & Sons) is enough to convince me that this is my new favourite part of town. 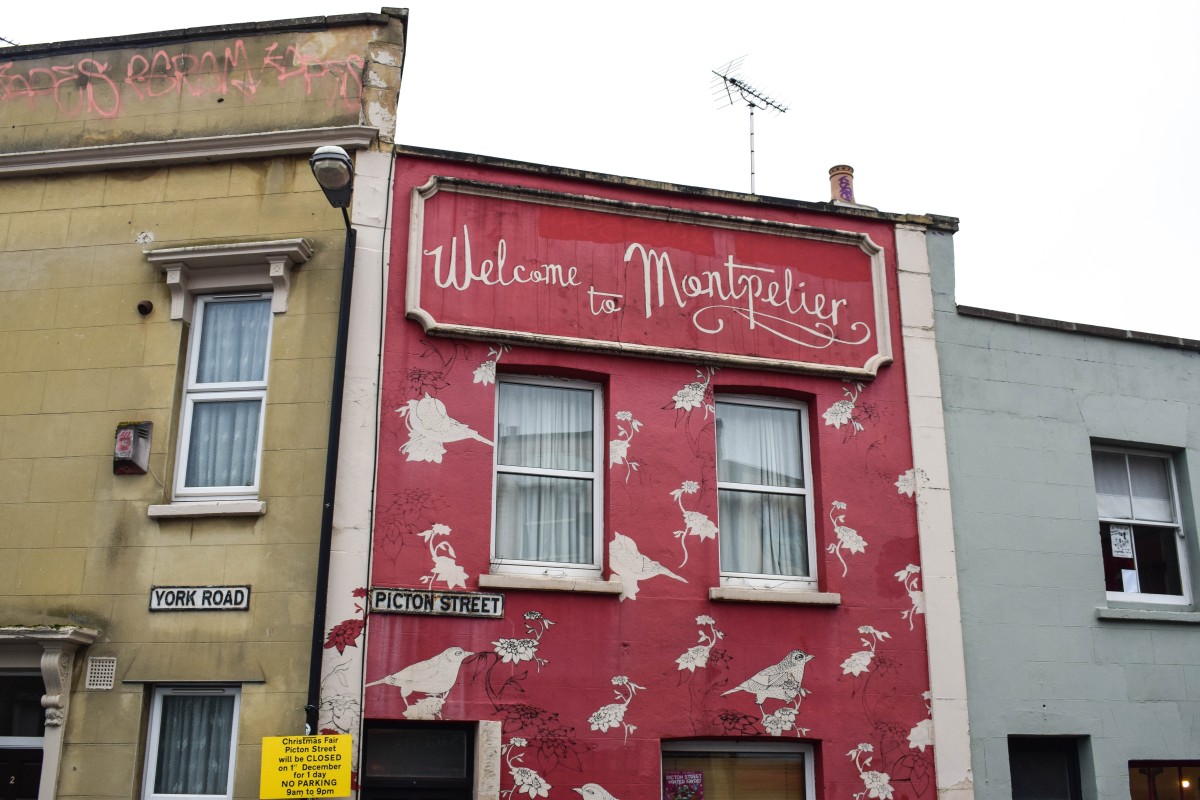 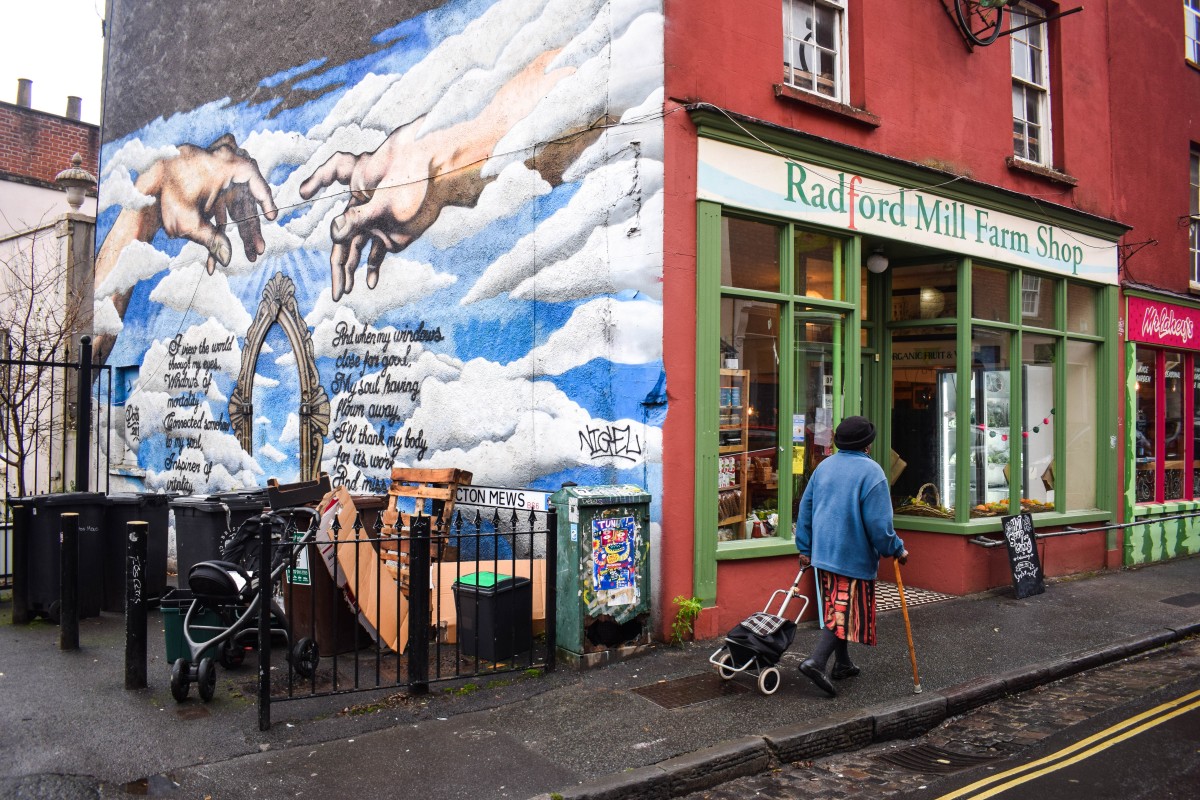 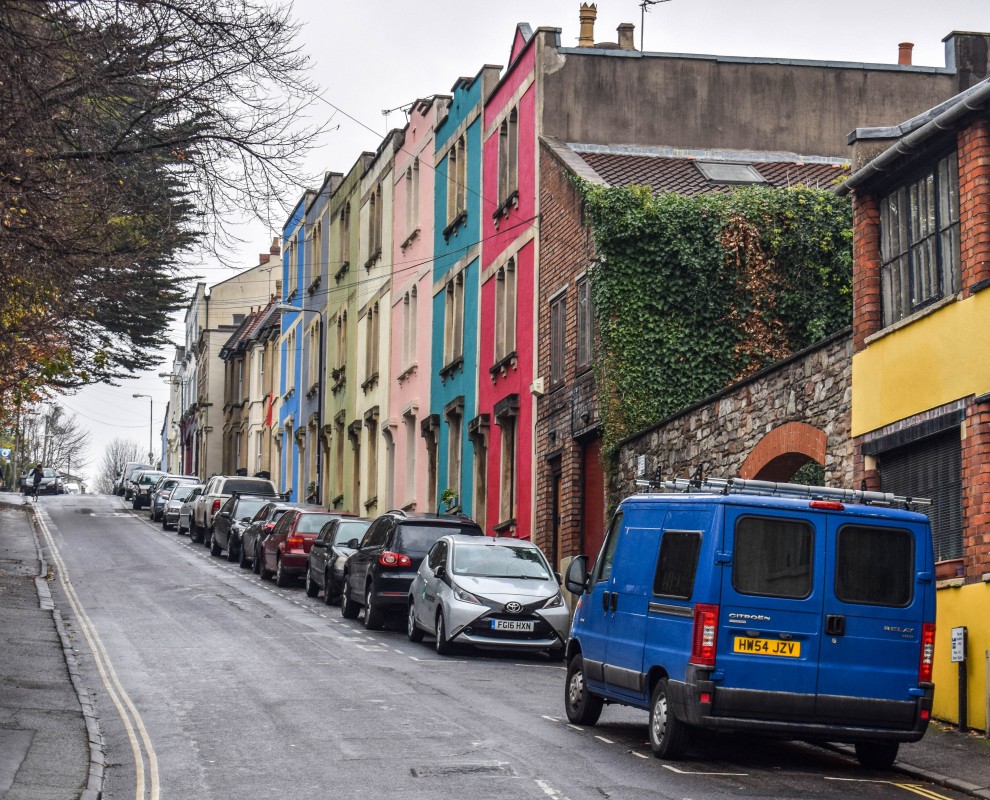 We manage to time our tour perfectly with the opening of local artist, Lucas Antics’ brand new gallery. Just across the street is one of her most striking murals that captures the spirit of this neighbourhood perfectly, with Oscar Wilde’s famous words:

“We are all in the gutter but some of us are looking at the stars”. 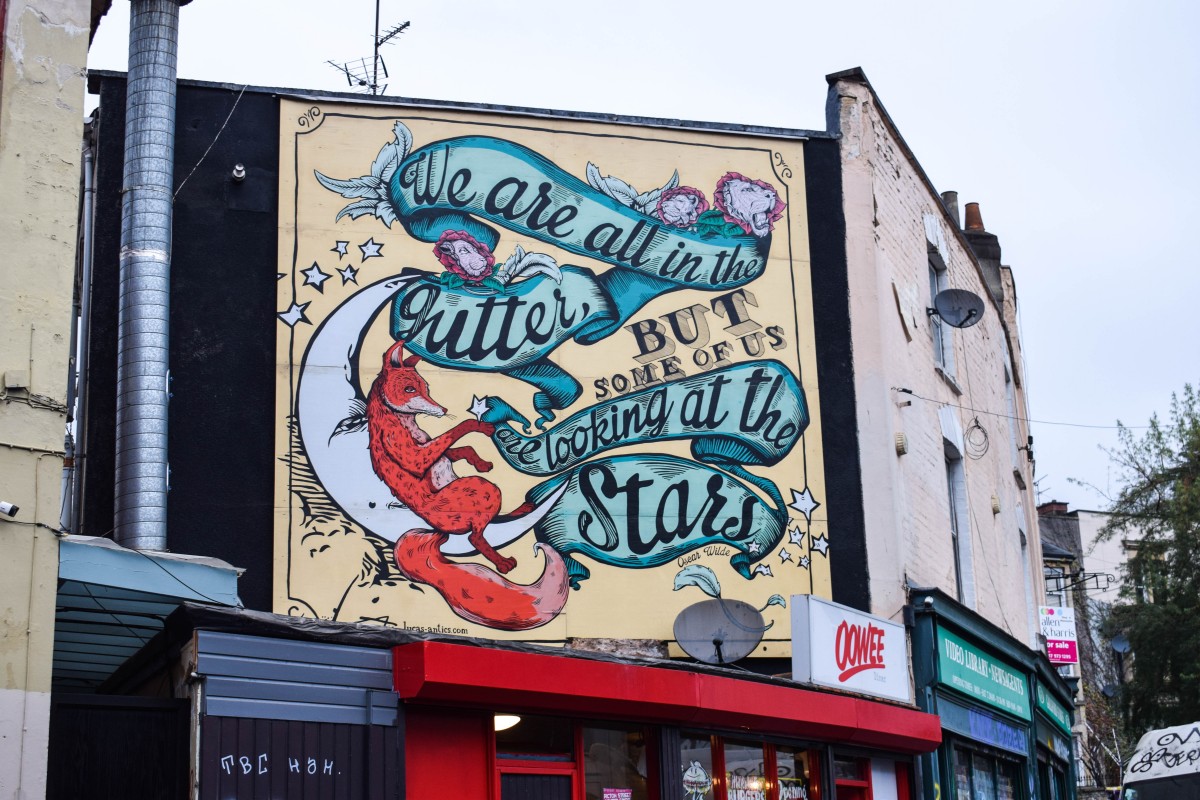 Running parallel to Picton Street is our final stop of the tour: Picton Lane – an unassuming little alleyway, packed full of unusual graffiti art. Locals come from all over the city to put their own creative spin on these walls – it’s one of the most expressive streets in Bristol, yet largely hidden from the public eye. 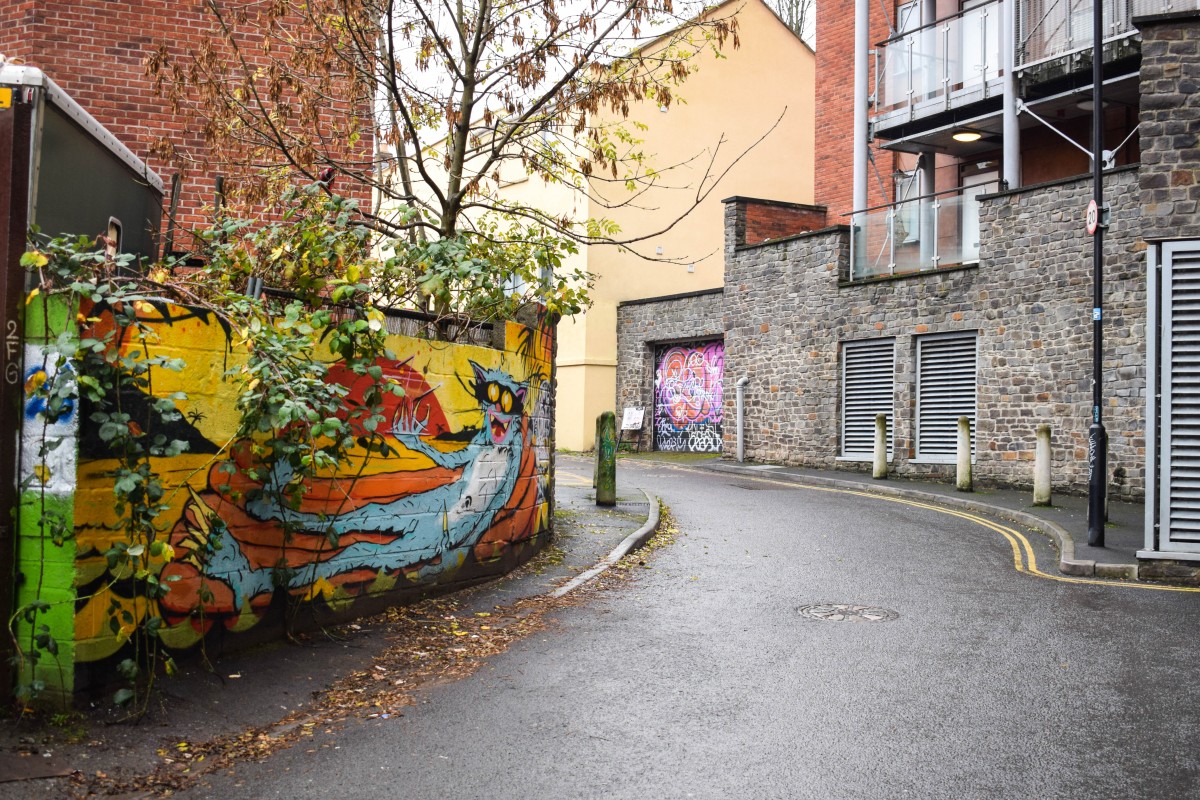 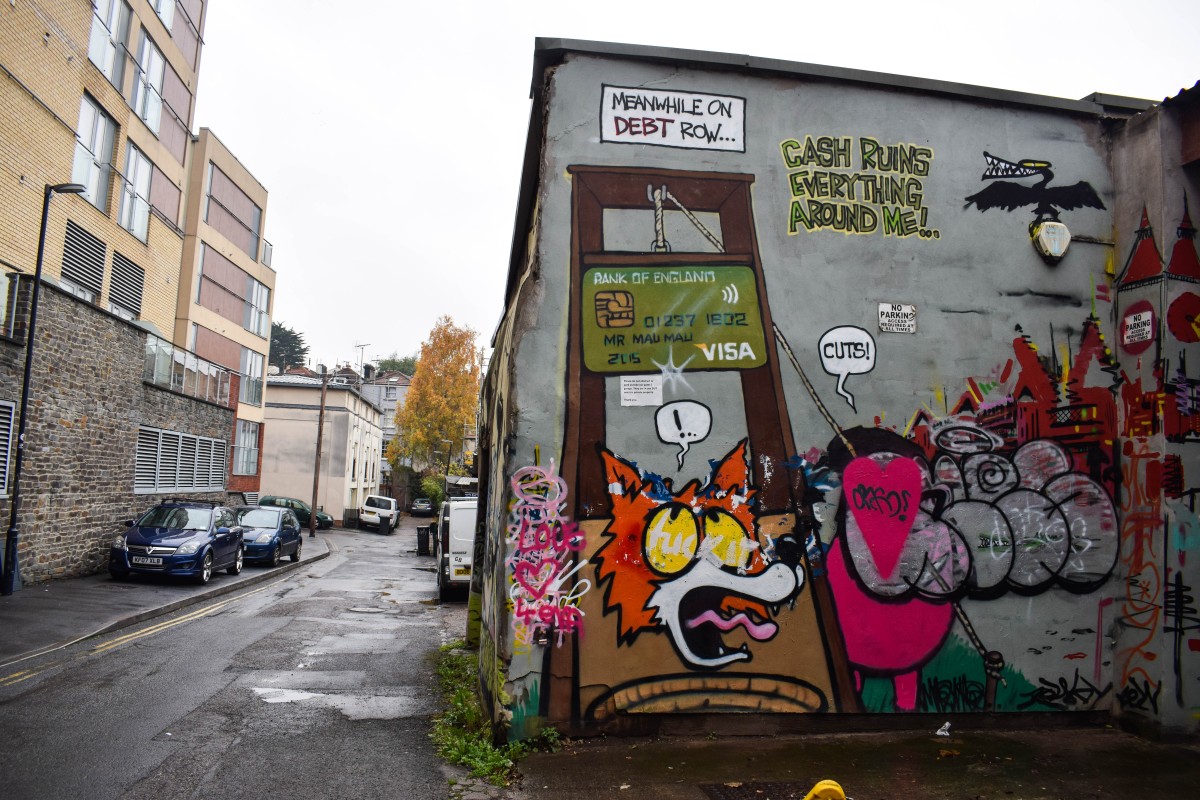 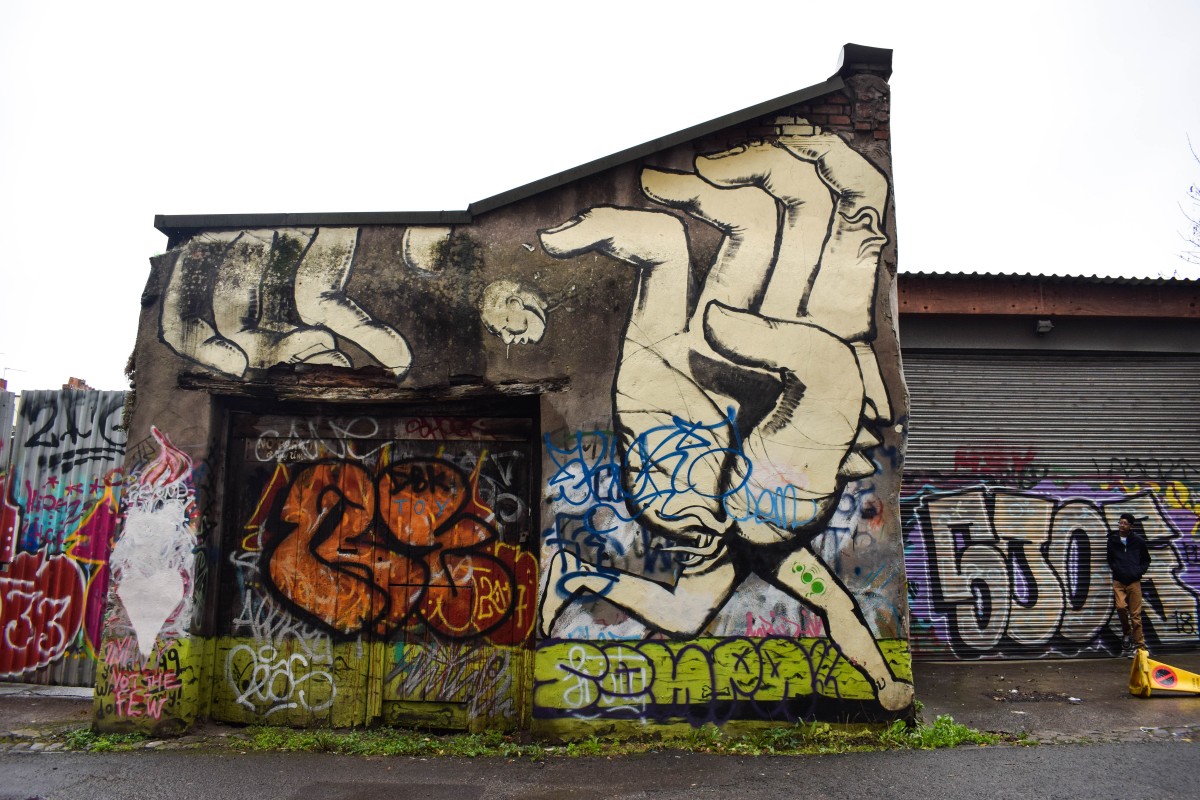 Our tour concludes back where it all began – at the People’s Republic of Stokes Croft. In just two hours, I have learned so much about this fascinating area and have discovered so many secrets down its unfamiliar, often misunderstood streets.

Whether you’re a local, or an out-of-towner planning your first visit to Bristol, this is one neighbourhood that should not be missed, if you want to get under the skin of the city. Want to know more? You can buy Colin Moody’s book here or contact him directly to find out how to book your place on future tours. 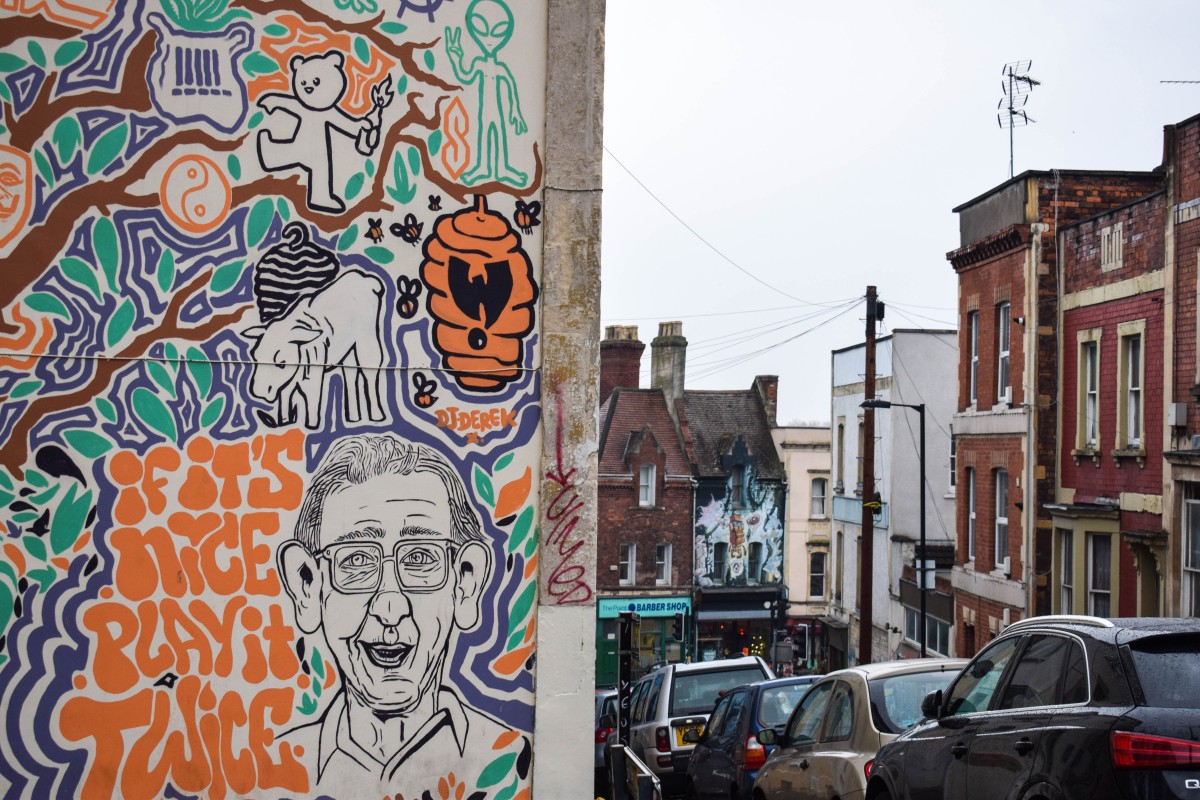